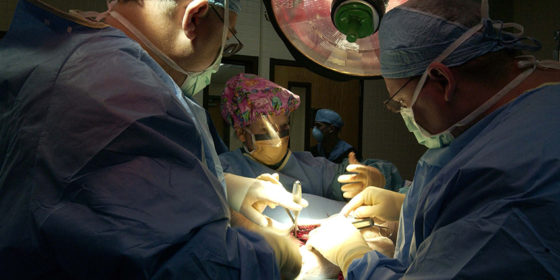 A man’s penis enlargement surgery has resulted in death for the first time.

A healthy 30-year-old man from Stockholm had gone to doctors to increase his genitals’ girth and length.

The surgery had been planned to use a process where fat is transferred from his belly to his penis.

He was one of 8,400 people worldwide to seek to enhance the size of their penis every year.

When surgeons had finished the elongation part of the surgery and started the enlargement, it went wrong.

Injecting the patient with two fluid ounces of his own fat cells, the fat leaked into his lungs and it resulted in a embolism.

This ruptured his blood vessels. Even though the patient had no prior heart conditions, he had a heart attack on the operating table.

Despite attempts from doctors to perform CPR, the man died two hours later.

Published in the Journal of Forensic Sciences, it said: ‘This is the first described case where a seemingly simple and safe procedure of penis enlargement by autologous fat transfer caused sudden death in a healthy young man.’

It also suggested the surgery was riskier since it combined two procedures.

A 2017 scientific review in Translational Andrology and Urology showed ‘the majority of men seeking penile elongation treatment have a normal penile size, which is functionally adequate.’

According to the review, the vast majority of patients seeking penis enlargement suffer from body dysmorphic disorder.