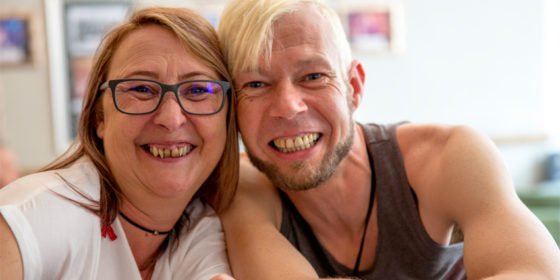 It’s a familiar story. I’ll be talking to someone on social media or a dating app, and when they find out I’m HIV positive, they block me or stop talking.

It’s happened many times since I was diagnosed with HIV in January 2013, and it isn’t a nice feeling. But these people that block or ignore you, are simply misinformed or ignorant about HIV in 2017, because there’s something they don’t know: people who are on effective HIV treatment can’t pass it on.

I can’t pass on HIV. This is fact.

My HIV treatment is so effective that it’s suppressed the amount of the virus in my blood to levels that are so low, that my HIV can’t be detected or transmitted.

This is commonly known as having an ‘undetectable viral load’ and it challenges all the usual fears and assumptions about HIV.

When I was diagnosed in Bournemouth, England, four years ago, back then, for me, having my HIV under control and having an undetectable viral load was about being healthy and having a normal life expectancy, so I wanted to start medication as soon as I could.

I read up about HIV and viral loads, and at my second appointment I told my HIV doctor I wanted to become undetectable as quickly as possible. Six months later it was confirmed: I was undetectable and I have been ever since.

With any virus you want to keep it under control and stop it from harming your health, and keeping my HIV undetectable with medication means I am in control of it.

Then last year, the pioneering PARTNER study showed that if you have an undetectable viral load, not only are you healthy and well, you can’t pass on HIV.

Today, that is the biggest reason I want to, and will, remain undetectable.

When you explain the science behind the fact that people on effective treatment can’t pass on HIV, people often ask ‘how big was the study then?’ Like they think it was three people in London for two months – some sort of Mickey Mouse study.

But no, it was a landmark study, the biggest of its kind and a total game-changer.

The PARTNER study looked at 58,000 instances of sex without a condom between couples where one was undetectable and one was HIV negative. It found zero HIV transmissions – zero, out of 58,000. But sadly, people aren’t always interested in the details of the research methodology.

The findings of the study have been life-changing. For me, life is a lot easier being undetectable and knowing I am therefore uninfectious. I feel a lot more secure having an intimate relationship with someone. But still there are loads of relationships and friendships that never even get started, just because people don’t this fact.

I’ve experienced stigma and rejection countless times, and today a new survey from Terrence Higgins Trust showed us the stark reality, in numbers, of this stigma. Nearly 40% of the public would be uncomfortable going on a date with someone on effective HIV treatment.

There is no reason to fear or avoid anyone living with HIV who is on effective medication. We must let people know this, especially here in our LGBT community.

If everyone knew that people on effective HIV treatment can’t pass it on, it would, frankly, be a really great thing. It would be a big relief for people newly diagnosed who are unnecessarily scared, and become recluses because they feel they can’t date or form friendships.

It would also be a big help encouraging people to test and know their HIV status, so they can start effective treatment, live a normal life and relax without the worry they will pass it on.

In fact, one in seven people living with HIV doesn’t know they have it, and therefore they can still pass on the virus.

So you’re much more likely to get HIV from someone who hasn’t tested recently, than from someone who is on effective treatment and therefore un-infectious. But it’s people who have been diagnosed and treated who get blocked on dating apps.

I’m lucky, because I’m able to stand up without fear, to say I have HIV and that I can’t pass it on. It’s a message of confidence. But there are many people who can’t because of fear and prejudice.

Today, Terrence Higgins Trust are starting to erode this stigma, shouting a simple message with their Can’t Pass It On campaign: people on effective treatment can’t pass on HIV.

Their campaign is backed by medical professionals, household name celebrities and importantly, people like me, who live this fact every day.

I’m proud to be joining them in shouting this message from the rooftops. I am not a risk, or a virus. I’m a person, I’m Par, I’m living with HIV, and I can’t pass it on.