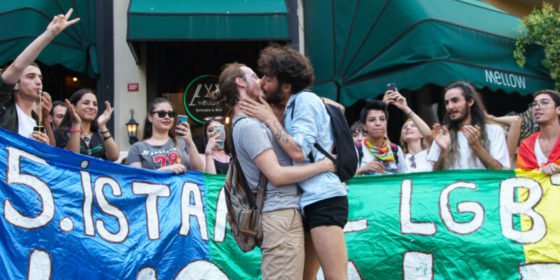 But marchers turned out in force to fight for their rights and take a stand against homophobia.

The police closed off the parade route streets, and confiscated all rainbow flags and clothing. They also set off gas bombs to break up large gatherings of marchers, according to Yolculuk.

It is unclear how many people were taken into police custody but early reports suggest as many as 22. 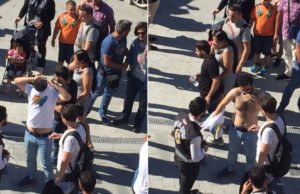 The LGBTI Honorary Week Committee said during the melee: ‘We are celebrating our 15th anniversary today.’

‘We are not afraid, we are here, we will not change. You are afraid, you will change, you will get used to it.

‘We have painted this street with rainbow colors for 12 years, we have spoken the word of freedom, we have lived together and showed the beauty of walking all over the world. We are here again, and now we show that we will fight with determination for our honor,’ they said.

Activists gathered on Mis Street for a dance party amongst all the chaos. 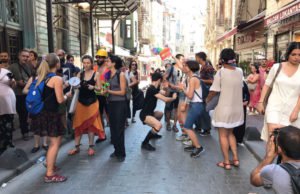 ‘If the state allows it, we will not. We will not allow them to walk,’ Kürşat Mican, the group’s head in Istanbul, said on KRT TV.

‘Wherever they march, we’ll also go. We will close down that street and they will not be able to go there. If we want, our numbers can reach 200,000.’

He claimed gay people have started to ‘organize in every neighborhood…destroying the unit of the family’.

‘Their project is to create a structure in every neighborhood. We are warning our intelligence agencies,’ Mican added.

‘This is part of a project by capitalist, communist and imperialist powers. By popularizing homosexuality, they want to destroy the unity of family, stop reproduction, end relations between wives and husbands, and prevent children born in such relations from growing up to be propitious to their land and country.’