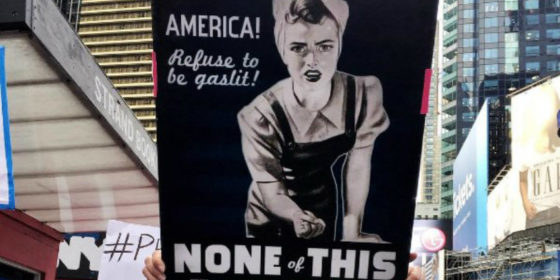 Chanting ‘resist’ and ‘we object,’ the protesters take issue with Trump’s declaration that transgender people will no longer be able to serve in the US military in ‘any capacity’. These comments come after Trump’s campaign promises to be on the LGBTI community’s side.

Another protest is taking place in the Castro, San Francisco’s LGBTI neighborhood. The emergency rally begins at 6pm at Harvey Milk  Plaza. Nearly 1,000 people have pledged to go, while over 1,500 more expressed interest.

Where protesters are gathering

Protests are happening now and being planned across the country for the future.

Two rallies are planned for the nation’s capitol, DC. One is happening Wednesday night at 7pm, the other is scheduled for 12pm on Saturday. Both protests are taking place in front of the White House.

#TransRightsAreHumanRights if you are in the DC area come to the white house tonight at 7pm to protest. #LGBTQ
❤

Pittsburgh is having their own protest tomorrow, Thursday, July 27, at 12pm in Market Square Downtown.

!!! protest against the transgender ban in pittsburgh !!!
– retweet, repost, and come support.
everybody is welcome ♥️ pic.twitter.com/993mm8cd0y

These protests continue the uptick in political activism in the United States since Trump’s inauguration. The Women’s March took place the day after Trump swore into office, while protesters flocked to airports to boycott the travel ban earlier in the year. Other marches for issues such as science, taxes, and healthcare have also taken place across the country.

Likely more protests will pop up across the country due to the ban. Keep an eye on social media and find out where they’re being held.