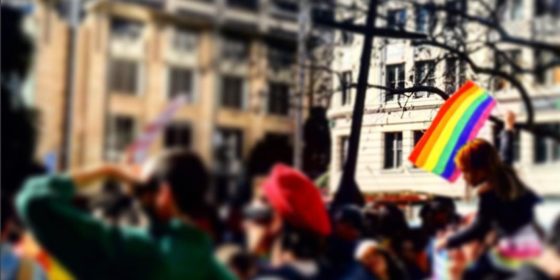 A conservative senator’s draft bill on marriage equality in Australia was released after weeks of anticipation.

Dean Smith is one of five government politicians working behind the scenes to make marriage equality a reality in Australia.

He revealed in July he was drafting a marriage equality Bill which he hoped would resolve the issue in Australia.

Today he released the Marriage Amendment (Definition and Religious Freedoms) Bill 2017 which would legislate for civil marriage equality.

There was speculation the Bill would include exemptions for religious organizations to refuse to hold same-sex weddings.

The Equality Campaign – one of the leading advocacy groups – welcomed the Bill saying it kept ‘with the roadmap set by the bipartisan Senate report agreed on earlier this year‘.

‘We’ve been waiting for marriage equality for a long time and now our politicians have the opportunity to make it a reality with a Bill that reflects the hard work and extensive consultation undertaken by a Senate committee earlier this year,’ said Anna Brown, co-chair of The Equality Campaign.

‘This is about civil marriage. No religious sacrament is impacted in anyway. Religious leaders will still have the right to conduct their marriage ceremonies in line with their doctrines and beliefs.’

Devil is in the detail

The Bill would allow two people of any gender to marry. But Ministers of religion would be able to refuse to perform weddings, provided they comply with anti-discrimination laws.

After much speculation today’s Bill confirmed businesses and non-religious organizations would not be able to refuse service to same-sex couples.

Just.equal is another marriage equality advocacy group who said the LGBTI community should be consulted about the Bill.

‘Congratulations go to the Liberals who are committed to achieving marriage equality. Now is the time for them to consult with the LGBTI community and communicate the merits of their bill,’ said Just.equal spokesperson, Ivan Hinton-Teoh.

Earlier this year the largest LGBTI community survey ever conducted found overwhelming opposition to exemptions that would allow discrimination against same-sex couples in the provision of wedding services.’

‘I’m concerned that some of the bill’s exemptions may be too broad, for example by allowing any business that can claim a faith link, however tenuous, to turn away same-sex couples.’

‘The LGBTI community and our families are thrilled to be so close to seeing marriage equality becoming a reality,’ she said.

‘However after so many years and so many other bills, our community deserves to be properly consulted about exactly what it is in the bill, particularly what is being decided about our right to access certain services.’

The draft Bill will be discussed in a private Liberal Party meeting on Monday. Prime Minister Malcolm Turnbull called the meeting last week to resolve the marriage equality issue within the party once and for all.

While the debate whirls around the draft Bill, advocates are still fighting to stop a proposed postal vote on the issue.

Some conservative politicians want a non-compulsory public vote to be held by post. The postal plebiscite is non-binding and would cost millions of dollars to hold.

But LGBTI advocates will fight the idea in the High Court.

Jonathon Hunyor, CEO of the Public Interest Advocacy Centre, has taken on the case for Parents and Friends of Lesbians and Gays (PFLAG).

‘The advice strongly suggests that without specific legislation the government lacks the power to validly hold a postal vote on same sex marriage,’ Hunyor said.

‘Parliament needs to pass a new law to allow a postal vote to be held on this issue and needs to allocate specific funds to conduct the postal vote. Neither of these conditions has been met.’