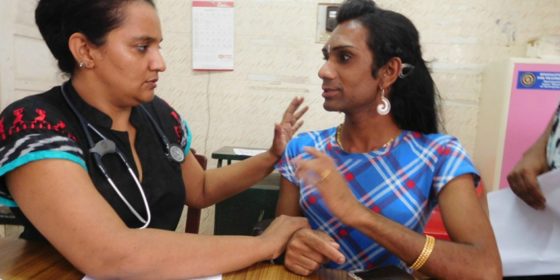 Requests for gender reassignment surgery are on the rise in the state of Kerala, India.

Open on the first Tuesday of every month the clinic has held two sessions since it launched in May. In those two sessions more than 50 trans people arrived for treatment.

‘The number will go up in the coming months,’ said Dr Sue Ann Zachariah, assistant professor of medicine and the nodal officer for the clinic told Scroll.in.

During a visit to the clinic patients can have a range of medical needs attended to including; general medicine, dermatology, plastic surgery, endocrinology and psychiatry.

‘This multi-disciplinary approach helps the doctors discuss the conditions of the patients and seek opinions from other doctors,’ said Dr Varghese P Punnoose, head of the psychiatry department.

Even if they attend for a seperate medical issue, almost all of the patients ask about gender reassignment surgery.

‘The endocrinologist promised start me on the hormone treatment soon,’ Swapna, a patient said.

‘I requested the plastic surgeon to carry out the sex reassignment surgery as early as possible.’

The clinic is part of a desperately underfunded government hospital, but doctors are confident they can start carrying out the surgeries.

‘But doctors have to undergo some more training before offering the surgeries.’

‘My protocol is to first make them psychologically ready for a role change,’ he told The Hindu.

‘I take into account their acute social isolation, possibly abusive sexual history, and depressive disorders. They need complete support and affirmation to lead the rest of their lives as a person from the opposite gender.’

Whether or not the clinic will be able to perform gender reassignment surgeries, it has already proved a vital service for trans people.

Many trans people avoid accessing even basic medical services for fear of discrimination and stigma.

‘I just have to travel half-an-hour by bus from my home to reach the hospital,’ said Sanjana, a patient.

‘I couldn’t meet a psychiatrist four years ago for want of money. The launch of specialised clinic shows things are changing now.’