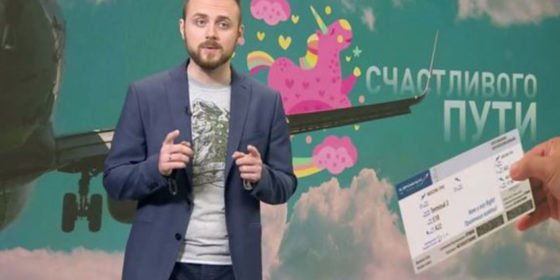 A religious TV channel in Russia is offering a LGBTI people a one-way ticket out of the country.

Tsargrad issued a video message calling on Russians of ‘non-traditional sexual orientations’ to write in to compete for a one-way ticket overseas.

Calling them ‘perverts’, ‘sodomites’, they also said they could ‘submit to their sins’ outside Russia.

In a video shared on their Facebook page, entitled ‘Good riddance, sodomites’, one presenter encourages those who ‘lay with men’ or ‘have some other perversion’ to contact the network to be selected for the exile.

The only requirement is a medical record of the ‘form of perversion’ the contestant ‘suffers from’, according to the video.

Homosexuality is not a crime, is not considered an illness, and is not the subject of a public record. However, propaganda of ‘non-traditional relationships’ means those who promote LGBTI rights can be arrested and fined heavily.

While they do not mention where the person will be sent to, California is named as a place as a ‘home of sin’.

‘This is not a joke,’ Andrey Afanasyev, the presenter says. ‘We really want you to return there, where you can openly submit to your sins.’

As some have noted, Tsargard uses Pride events from around the world in the clip. This could be very easily be considered ‘gay propaganda’ under Russia’s law.

Tsargrad is a niche satellite channel that was set up to promote Christian Orthodox values.