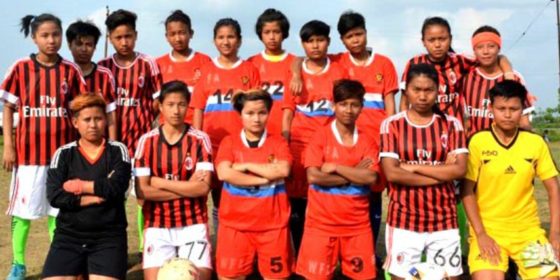 A hotly contested soccer tournament in India has raised trans awareness and let trans teens to get back to playing the sport they love.

Along with other organizations, Empowering Trans Ability (ETA) put the tournament together.

‘We are hoping to raise public awareness on these issues through this football match.’

The competition has allowed 23-year-old Aily Yumkhaibam to get back to playing the game he loves.

‘At the end of the match, an old man came up to me and said, ‘You played well’,’ Yumkhaibam told Eclectic North East.

‘Even if I did not score any goal, those were precious words of encouragement for me. Now I dream of building a team of trans men who can play football professionally.

‘When I came back home and informed my parents that we had won, they were happy too. They urged me to tell them all the minute details of the match – who scored the goals, how, etc.’

‘The match was not about winning, but the social affirmation of the transgender community,’ adds Hemabati.

In other Indian states trans rights and inclusiveness are miles ahead of Manipur.

But with ETA and other organization’s hard work, trans awareness is improving in schools, government departments and the private sector.

Some colleges include a third gender options on enrolment forms and Manipur now has a Transgender Welfare Board at the state government level.