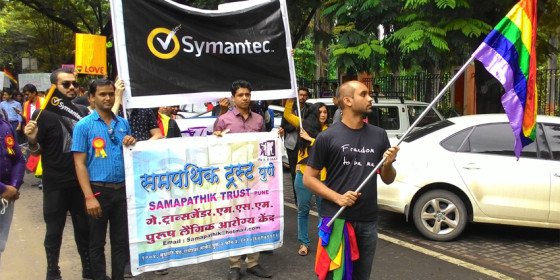 The popular pride march in the Indian city of Pune will be lead by straight allies to celebrate their support of the LGBTI community.

The idea to let straight people lead the pride march ties in with the theme of this year’s pride event, ‘Acceptance by families of LGBTQ persons’. The Pune pride team chose the theme to stress the importance of straight allies in the fight for equal rights.

‘Queer individuals, if and when they want to, choose to come out to a family member, friend, or someone they trust,’ Bindumadhav Khire, president of the organization that plans that pride march, Samapathik Trust told Times of India.

‘NGOs and support systems are important, but what’s more crucial is the love and acceptance they look for from immediate family and friends.

‘This forms a key foundation for the rest of their lives. For this year’s parade, we’ve decided to honour this acceptance by our straight allies.’

Souvik Ghosh works in IT by day but has dedicated his free time to planning the parade this year.

‘We’ve always sought and celebrated the support we receive from straight allies, but we’ve reached a stage now where the movement is no longer about the LGBT community alone,’ he said.

‘The purpose now is to show society that we have the support of our non-LGBT allies, which explains the theme.’

‘Till now, we’ve had a single person from the community leading as grand marshal; but this year, a group of straight allies (parents, siblings, relatives and friends) will hold the parade flag,’ said Bindumadhav.

Last year a number of businesses participated in the parade and Bindumadhav hopes that number will grow even further this year.

‘We look forward to larger participation from companies and straight allies this year as well. We’ll be reaching out to more companies and colleges ahead of the march,’ he said.