The Archbishop of Sydney has accused same-sex marriage of making 2017 a “horrible year”.

In a Christmas message for followers of the church, Anthony Fisher said that 2017 was “annus horribilis”, a Latin phrase meaning horrible year. ﻿

In the seething attack, he said that the year had been especially challenging for Christians because of marriage equality.

“Like any year, this one has had its challenges for our world, our country and each of us individually,” Archbishop Fisher said.

The religious figurehead also condemned the findings of the Royal Commission into institutional child sexual abuse, despite voting against key recommendations which would have required priests to break the seal of confession to report suspected paedophiles.

He added: “For people of faith you might say it has been an ‘annus horribilis’, as our Christian conceptions of life and love have been challenged in the marriage and euthanasia debates, freedom of religion in Australia put in doubt and shameful crimes and cover-ups in our church uncovered by the royal commission.

“But the Christmas story insists there is a star in the dark sky, light amidst the fears and failures.”

He finished the message by calling on young religious people living in Australia to restore hope for the church and nation.

“Our young people are not naive about the shames in our past or the trials in our future, but they want to be part of the answer to both.

“They are generously responding to the call to be priests and prophets, servant leaders and saints, the spiritual heroes we need for our times,” he added. 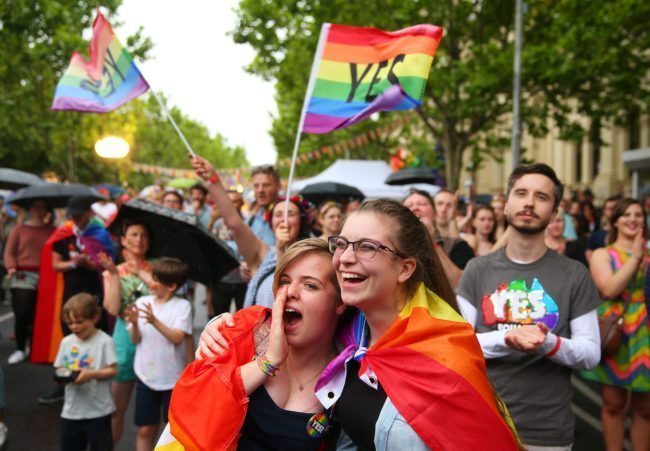 LGBTQ activists in the country have condemned Archbishop Fisher for the comments.

Just.equal spokesperson, Rodney Croome, said: “It is morally wrong to draw any link between marriage equality and the royal commission. One is about the equal recognition of loving, committed adult relationships while the other is about the church’s failure to stop the sexual abuse of children.

“I don’t expect Archbishop Fisher to embrace marriage equality but I’m disappointed he continues to demonise it by association. The Archbishop’s words are particularly disappointing at Christmas time when many Catholic families are preparing for the joyful summer wedding of a loved one.”

“Polls repeatedly showed a majority of Catholics back marriage equality, so the Archbishop’s unfair comments will do nothing but weaken his authority.”

“The one point at which the Archbishop is correct is when he says young people will right the wrongs of the Church, because young Catholics overwhelmingly support marriage equality.”

A plebiscite on same-sex marriage was run in Australia earlier this year, and on November 14 it was revealed that the country had voted yes in the historic vote.

Almost 13 million Australians (79.5%) voted in the country’s non-binding postal ballot – a bigger turnout than in even the UK’s EU referendum.

Since the plebiscite was held, legislation has been passed to legalise the vote.