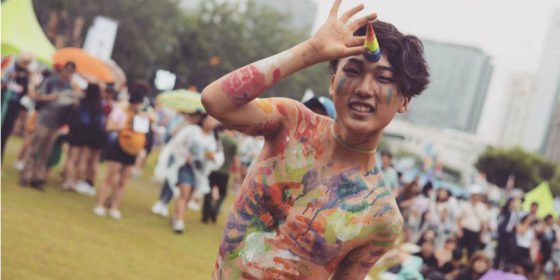 Over 85,000 people marched through Seoul for its biggest Pride parade ever on Saturday (15 July).

According to the Korea Herald, sporadic rain couldn’t keep crowds away, with an estimated 35,000 people more than last year.

Since its inaugural event in 2000, the Pride parade has gone from strength to strength. This year, Drag Race star Detox also joined the festivities.

But every year, conservative Christians hijack the parade for their own protests.

‘We do not want them to showcase homosexuality in public, which can corrupt the minds of our children,’ pastor Hong Ho-soo, secretary general of the Homosexuality Countermeasure Council for Korean Churches told the South China Morning Post.

Some 6,000 police officers monitored the proceedings but no major incidents were reported.

‘It’s okay to celebrate whatever you are at home or privately. Just don’t do it in front of others,’ Ho-soo said.

While homosexuality is not a crime in South Korea, the social stigma forces many LGBTI people not to come out.

But to celebrate Seoul’s largest and most successful Pride, we’ve compiled a list of some amazing photos from the day.