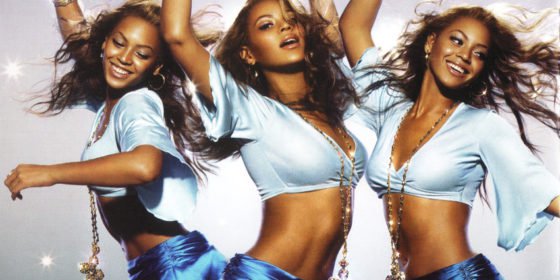 This week sees the release of Angels In Chains,  the new single by Spice Girl Geri Horner (nee-Halliwell).

We caught up with the artist formally known as Ginger last week to talk about the heartfelt ballad. Released in honor of her late friend George Michael, the track will raise money for George’s favorite charity, Childline.

Geri enjoyed a string of hits in the late 90s/early 00s after leaving the Spice Girls. Four of them – Mi Chico Latino, Lift Me Up, Bag It Up and It’s Raining Men – even reached number one in the UK. That said, her best song didn’t reach quite these lofty heights…

Naturally, Geri’s got us thinking of all the other girlband-members-gone-solo singles that have defined our lives. Here are 12 of our favorites…

RIP Destiny’s Child, but this is the best song ever recorded by an ex-girbander. Period. Although Baby Boy, Irreplaceable, Halo, Pretty Hurts, Work It Out (remember that?) and, yes, most of Lemonade are up there.

But there’s something timeless, something blissfully, rapturously perfect about this one. That said, does it better the DC’s Survivor? The jury’s out on that one.

One of many collaborations with now-husband Jay Z, Bey used the throwback cool of Crazy In Love to open her iconic 2011 Glastonbury set, in a thoroughly sensible move. I was in the front row for it, and the moment I heard those horns, I wept with excitement.

While Kelly is still a regular fixture on TV – she’s been a judge on The X Factor US and UK and was most recently seen on The Voice Australia – she’s never matched her former bandmate’s musical output.

But this is kind of a misconception. Kelly’s sold 40 million records as a solo artist (plus 60 with the band), across four studio albums and 44 singles.

With this super relaxed Nelly collab Dilemma, she even scored a US number one before Beyonce did, thanks in part to a sleek video filmed on the set of what would one day be Wisteria Lane in Desperate Housewives.

She’s possibly the most famous female pop star the UK has produced this century (bar Adele). But let’s face it: phonically-speaking, Cheryl’s solo career has been disappointing. How Fight For This Love sold a million copies we’ll never know, and the annoying video for 2014’s I Don’t Care still haunts us.

But in Cheryl’s defence, Girls Aloud sustained an unprecedented run of flawless, surprisingly complex top 10 singles (21 to be exact). From Sound of the Underground to Biology (not to mention the punctuation-drunk Sexy? No No No…) how could Cheryl’s oeuvre compare?

Well, with Promise This, she knocked it out of the park. It’s unconventional, addictively fast-paced, and faintly ridiculous. Although the lyrics ‘Alouette, deployer l’aile’ aren’t exactly nonsense, roughly translating as ‘lark, deploy the wings.’ With this one, she did.

4 Mel B featuring Missy Elliott – I Want You Back

It’s no secret that Mel B had the least successful solo music career of all the Spice Girls. However, she has been one of the most successful generally, coming second in Dancing With the Stars and judging America’s Got Talent.

But it was the eerie, punchy R&B of her debut solo single I Want You Back that really surprised people back in 1998. Producer and featured vocalist Missy Elliot offered added credibility, and the song went straight to number one in the UK.

5 Nicola Roberts – Beat of My Drum

All of the Girls Aloud members have released solo songs and albums to varying degrees of success. (As Louis Walsh once said: ‘Everyone’s forgotten Kimberley Walsh released a solo album – even her!’)

Nicola Roberts may not have topped the charts like her BFF Cheryl, but she did enjoy a level of critical acclaim akin to her Girls Aloud days with her debut album Cinderella’s Eyes.

The lead single was a slice of achingly cool and smart dance pop with an indie edge. Many speculated it served as the inspo for Madonna’s weak 2011 comeback single Give Me All Your Luvin’.

Now to this writer’s favorite song in this list, and a rare example of two ex-girlband members cross-pollinating their success and favored styles of music.

This trippy, meandering mid-tempo number see’s Sporty Spice Mel reluctantly give in to her sexual attraction to a friend (some have claimed the song as about lesbian experimentation). The spaced out video sees her ruminating in a remote apartment overlooking beguiling Icelandic landscapes.

TLC’s Lisa ‘Left-Eye’ Lopes elevates the track with a playful, strange guest rap. Lisa, of course, tragically died in a car accident in 2002 at the age of 30: her finest solo moment outside of this song was the fizzy (but underperforming) single Block Party. Mel, meanwhile, is gigging and releasing music to this day. This year’s album Version of Me has been especially well-received.

7 Siobhan Donaghy – So You Say

The Sugababes are surely one of the most underrated girlbands ever; their impeccable back catalogue overlooked by the ridiculous, revolving door nature of band membership. The more recent reunion of founding members Mutya, Keisha and Siobhan’s should’ve been triumphant, but bored by their indecision, fans’ interest waned.

They’re apparently releasing a new album this year and we’re crossing our fingers that it’s amazing. After all, their debut was quietly iconic. And Siobhan’s second solo album Ghost? Even more so.

For fringe pop purists, Ghosts and its singles – the wild, euphoric So You Say and the irreverent Don’t Give It Up, each echoing Kate Bush – are next to godliness.

Siobhan’s bandmate Mutya also released some formidable work during her brief foray into solo stardom. (An album was slated for Keisha – probably the strongest singer of all Sugababes/MKS members combined – but oddly never materialised).

The epic Real Girl – inexplicably co-written by none other than Lenny Kravitz – was her first single. It’s an uplifting statement of female empowerment, irresistibly tempered by Mutya’s trademark nonchalant delivery. It reached number two in the charts.

The star also recorded an amazing and underrated duet with the late George Michael; their song ‘This Is Not Real Love’ reached number 15.

9 Camilla Cabello – Crying In the Club

Onto current climes and the intriguing first release from former Fifth Harmony star Camilla Cabello. The most compelling member of the band quit last year amid a blaze of publicity and barbed remarks, mere months after their inescapable smash Work From Home.

Big things are now expected of Camilla. But Crying In the Club, her proper debut, is neither victory nor disaster – just like her guest spots on Shawn Mendes’ I Know What You Did Last Summer and Machine Gun Kelly’s Bad Things.

It’s straight from Sia’s production line of depressive club bangers, which is a good and bad thing. We love it, but it’s failed to light up the charts so far. That said, it feels like a precursor to something bigger and better, doesn’t it?

10 Geri Halliwell – Look At Me

But it was her first single that was the most interesting thematically, displaying a surprising levels of self-awareness and parody.

In the superb Prague-filmed video, she killed off Ginger Spice and debuted a more toned-down look. But it was all a ruse, as the lyrics proved. The big shoes and the red hair were gone, but whether screaming ‘Look at me!’ or emerging from a pair of giant inflatable legs at the Brits (as she did the following year), Geri will always know how to grab your attention.

It’s a truth universally acknowledged that a girl band member gone solo will never better her band’s achievements. (Unless you’re Beyonce). This is nowhere more apparent than in the solo discography of lead Pussycat Doll Nicole (an ex-member of not one, but two girlbands). After all, she’s been robbed of a hit in her native America.

She’s had a better time of it in the UK, where she’s accrued seven top 10s. This, her sole number one, is her most sophisticated number.

Passing over the overwrought production of Poison and the edgy confrontation of Whatever U Like, Nicole’s best song is a straightforward, spirited pop banger about getting over an ex. It’s a timeless track that could’ve been a hit in the 90s, 00s or today.

She’s still fabulous at 73. But in 1970, at the tender age of 26, Diana Ross quit The Supremes – the soul group of which she was lead vocalist, having scored US number ones with Baby Love and Stop In the Name of Love.

The drama leading up to her departure inspired the musical Dreamgirls (Beyonce and Jennifer Hudson starred in the Oscar-winning 2007 movie adaptation). But Diana’s true legacy is in her solo material.

Upside Down, Chain Reaction and of course I’m Coming Out are all gay anthems. (Also, If We Hold On Together – the theme tune to 1988’s animated cry-fest The Land Before Time – is the song of my childhood). But her magnum opus is her 1970 cover of Ain’t No Mountain, which eclipsed the original version recorded by Marvin Gaye and Tammi Terrell only three years before.