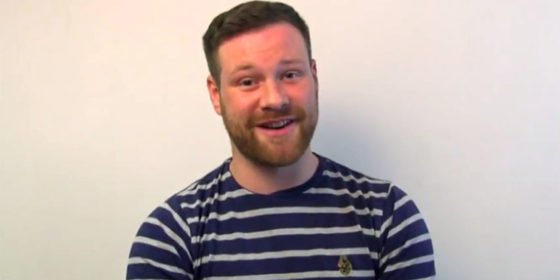 Chances are if you’ve heard of Tourette’s syndrome, you just think it’s a disorder where people just swear all the time.

But there is one gay guy who is here to share with you the misconceptions you very likely believe, and the myths that should be broken.

Damian Friel, a 26-year-old student and mental health nurse from Derry in Northern Ireland, has opened up about what it is like to be a gay guy with Tourette’s syndrome, ADHD, anxiety and depression.

Having starred on Channel 4’s First Dates, a show which pairs people up on a blind date, he spoke with Gay Star News about what it’s like to date with Tourette’s and also the best way to treat someone with Tourette’s.

Friel is unusual in that he only really discovered he had Tourette’s as an adult, but in reality he has been living with it for a very long time.

‘When I was younger, I would have tics. My mum thought I had a problem with my ear,’ Friel told GSN. ‘But the doctor said nothing was wrong.

‘At 13 to 16 I used to have this habit of spitting quite a lot. It used to frustrate me, as it was disgusting, but I couldn’t control it.’

But at 21, Friel’s mental health went into a spiral and he was suicidal.

‘It just happened I was in a relationship at the time and that was on the rocks as well,’ he said. ‘The combination of that and my mental illness problems just became too much for me to deal with.

‘I couldn’t get through one sentence without involuntary swearing. I couldn’t speak without throwing my arms around’.

‘It is documented a lot of traumatic stress will bring back something that was already there.’

In the same year his appendix burst so he was in hospital for two weeks. His brother also died.

‘Since then my tics have decreased, a hundred times less than what they were,’ Friel said.

‘I couldn’t get through one sentence without involuntary swearing. I couldn’t speak without throwing my arms around. At times I couldn’t walk without my leg giving way so it affected my mobility as well.

‘Even though that breakup could have been a catalyst, I don’t blame it for it. It could very likely have been any event in my life at that point that could have triggered in me to become more prominent.’

What are misconceptions about Tourette’s syndrome?

‘Many think when you’re an adult most people grow out of it,’ Friel said. ‘But you don’t, you just learn to manage it better.

‘Some of the funnier misconceptions were that I’m possessed, which I politely declined [an exorcism].’

He added: ‘Most people just want to ask questions, and I’m quite happy for people to ask questions. It’s just when people tell me stuff like, “oh you’re just saying what everyone’s thinking”. And that’s not right at all. It’s good for me to spread awareness, and I’m always happy to answer.’

This is our third video in our three-part series on Tourette’s syndrome  for Gay Star Support. You can see the first one on dating here, and the second one on living with Tourette’s here.

You can hear more from Damian on the MenTalk Health podcast.