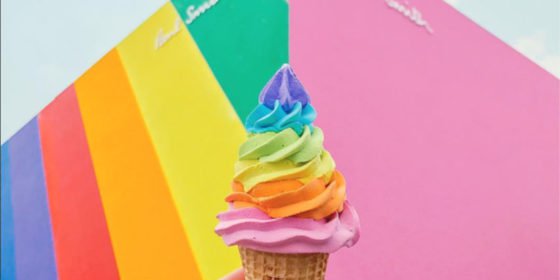 An Instagram icon has been transformed for Pride month.

Even if you are not aware of where it is, chances are you will have seen the ‘Pink Wall’ exterior of the Paul Smith store on Melrose Avenue in Los Angeles.

The bright pink wall is a favorite for many Instagram users, from celebrities to your average Joe.

In fact the wall is so popular it now has its own security guard. Their task? To make sure nobody is run over, and to enforce a ‘no professional cameras’ rule.

But now one of Los Angeles’ Instagram landmarks has gotten a makeover to celebrate Pride.

Instagram painted one side of the store in rainbow stripes.

And it is only the beginning.

In a statement, the social network said they would be painting a number of walls across the globe in the same way.

‘In honor of Pride, we’re kicking off a global initiative to turn walls in cities around the world into colorful beacons of support,’ they said.

Other cities to get Pride-themed murals will be London, Madrid, Nashville, and Cleveland.

They are part of the Kind Comments movement, which encourages users to share kindness by leaving supportive comments and ‘make someone’s day’.

Yesterday’s (31 May) opening of the first rainbow wall was attended by a host of people, including out YouTube stars Hannah Hart and Joey Graceffa and pop duo Tegan and Sara.

Of course there were plenty of pictures.

But even if you cannot make your way to any of these locations, there is still a way to celebrate Pride on Instagram.

To mark the occasion, they have released a number of Pride-themed emojis as well as a rainbow brush.