A lesbian couple from Japan have got married and their wedding was a fairytale dream.

Haru and Ryo finally tied to knot after spending 13 years together, and the wedding was as perfect as a Disney film. 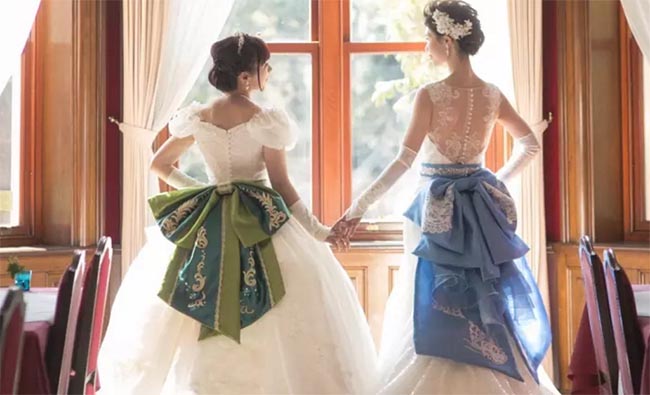 The couple, who are die-hard Disney fans, decided to wed at DisneySea in Tokyo.

Their wedding dresses nodded at Frozen, with Haru wearing a green sash reminiscent of Princess Anna and Ryo wearing a blue one like Queen Elsa.

The pair even got engaged in true Disney style, with Rio popping the question dressed as Flynn Rider to Haru, who was dressed as Rapunzel.

The two have had to overcome numerous obstacles before finally marrying.

The couple only lived in the same city after six years into their relationship, having previously been long distance up until an earthquake that sparked Ryo’s decision to move to the capital.

Before getting engaged, Ryo also had to come out to her parent’s and tell her about her relationship.

“I think my mother had an inkling, but I thought my father would definitely not accept it,” Ryo told BuzzFeed News.

“I was prepared to be disowned by my parents and if my parents were not attending, there was no point in having a ceremony.”

However, Ryo’s parents accepted her and her relationship.

“[My parents] had an opportunity to experience an open-minded LGBT culture on one of their travels abroad,” she said. “They had become more flexible, partly due to such experiences, and they easily accepted me.”

Coming out strengthened their relationship. “I did not have many chances to talk to my father to begin with, but after I came out and started planning the wedding, I was able to talk to him more.”

“Normally, taking time off for your wedding would be celebrated by everyone, but instead, I was worried that people would think of me as someone who uses a lot of paid vacation time,” Haru said.

Eventually, the pair both came out to their bosses buy didn’t request the time off given to straight couples to plan their weddings.

Rather, they took regular holiday time, and the final event was certainly worth it.

While their marriage is not legally recognised, some localities can recognise the partnerships between same-sex couples.

Despite this, the ceremony was key for Haru and Ryo because it is “meaningful”, even if they do not get a marriage certificate.

“We cannot become a married couple with a marriage certificate,” Haru said. “Something that normally gets done with a piece of paper does not apply to us. That is why having a ceremony is meaningful. Saying the vows in front of everyone and being treated as a married couple makes us one.”