A candidate standing for election to Westminster Council in London who previously suggested gay sex was ‘immoral’, has failed to win her seat.

Council elections took place across England yesterday. The borough of Westminster has traditionally been a Conservative stronghold.

Hillary Su was one of the new Conservative candidates hoping to secure a place on the council. However, the central London district has been heavily targeted by Labour party candidates who hoped to take control.

Westminster is also home to Soho, home to many gay bars and businesses. Opposition candidates were quick to highlight a tweet Su posted last year. In it, she appeared to suggest  gay sex is ‘immoral’.

In May 2017,  Tim Farron, then leader of the Liberal Democrats, made headlines for his refusal to say whether he believed gay sex was immoral.

A Twitter user questioned the media fixation with Farron’s views. They tweeted, ‘Why the intense scrutiny of Tim Farron’s stance on gay sex – but none for Theresa May?’

Su responded: ‘The right to private life, however immoral, is what free society offers – so long as it doesn’t interfere with others or break laws #equality.’ 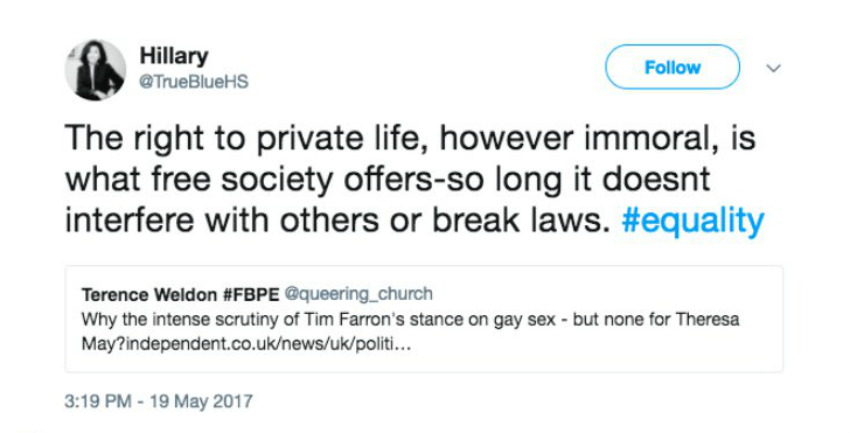 When the tweet led to criticism, Su issued a statement.

‘I do not make judgements about people’s relationships or what people do in private and it was never my intention to suggest otherwise. As a Christian, I believe we should embrace love and celebrate it wherever it is found.

‘I am proud of the Conservative Party’s record on equality, including the historic step of legalising equal marriage and I will always support equal rights and the people I represent.’

In yesterday’s election, Su failed to win her seat. However, the Conservatives retained control of the council. Conservatives took 41 seats (three down from 2014) and Labour took 19 (three more than 2014).

Lilley also failed to win his seat by just 20 votes. However, he said it had still been a good night for Labour in a traditionally Conservative stronghold. One of his colleagues, Pancho Lewis, was successful in gaining a West End council seat.

‘There’s no doubt Hillary Su’s views were rejected by the electorate.

‘In Pancho Lewis Labour have their first councillor for West End ward of London in 50 years and the LGBT community have an ally representing them in this key district of London.’

As the results were announced in the early hours of this morning, Conservative leader of Westminster Nickie Aiken said she was ‘delighted’ with the result, despite losing some of her Conservative colleagues.

‘The people of Westminster have spoken and said that Jeremy Corbyn is not welcome here.

‘It is a vote against the nasty, nasty, dirty politics of the Labour party and we have proven it will not work here. They threw everything at us [during this campaign]. Tonight proves their politics have to stop.’

Overall, across England, both Labour has benefitted from the collapse in the UKIP vote, which has withered since the UK voted to leave the European Union.

However, most political commentators believe Labour has not made the gains the party believed possible. Although both Labour and the Liberal Democrats saw an increase in numbers of councillors, the vast majority of councils have remained the same with no one party making a decisive gain in council gain.