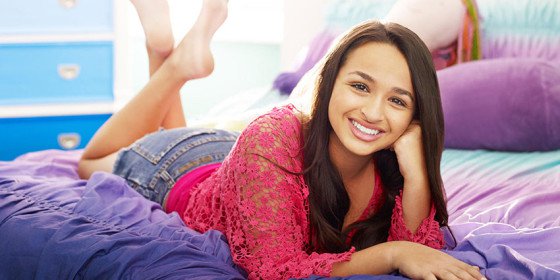 In today’s season premiere of the reality series I Am Jazz, transgender teen Jazz Jennings gets personal about her body.

‘I don’t want top surgery anymore,’ the 16 year old tells her doctor and her mother.

‘I’m pretty happy with my body.’

Her doctor reacts to this announcement by saying: ‘This is the first time I’ve heard you say that you’re happy with your body. You’ve been happy with certain changes, but there were always concerns. This is the happiest I’ve seen you. You seem more comfortable in your own skin now than you have since I’ve known you, and that’s really, really great.’

Jazz’s mother Jeanette tells People.com: ‘To hear that Jazz is developing just like her peers, it just makes me so happy. I’m so happy for her, and it kind of confirms — it really confirms — that [her dad] Greg and I have been making the right decisions with respect to her medical care. We are on the right path.’

Jennings has had consultations about bottom surgery and been open about that as well.

‘This is something that I’ve always looked forward to,’ she previously told People. ‘It’s definitely a very serious procedure.’

The teen says being so public about something like surgeries can be difficult ‘but I always say someone has to do it in order to get the information out there.

‘I feel like a lot of people are kind of ignorant to transgender issues. It’s important that we share our stories and allow our voices to be heard.’

She and her parents were first in the public eye back in 2007 when they were interviewed by Barbara Walters for an episode of ABC’s 20-20.