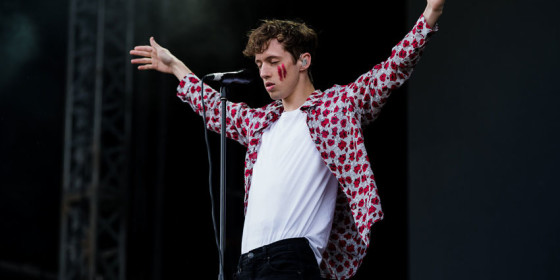 Eastmond is suffering from Ewing’s Sarcoma. It’s a rare form of bone and soft tissue cancer.

After crowdfunding money for one round of treatment, Eastmond said he was facing criticism on social media:

‘Not everybody thought it was ok for me to take from other people.’

Eastmond recently posted to Twitter concerns about setting up a new GoFundMe page for alternative therapies and treatments that he has been researching.

In a post on HISKIND’s website, the magazine Eastmond edits, he explained how the singer came across these tweets:

‘Troye and I have kind of known each other for a few years.

‘We used to chat a little bit online in the past and mutually followed each other since, but nothing particularly more. (Apart from me obviously fancying him way too much as a young gay guy coming out circa 2013 and being a supporter of his music.)

‘Troye had offered, there and then, to completely cover the cost of this alternative treatment. Saving myself and my family from being financially crippled in the most difficult time of all of our lives.

‘Within minutes, he had lived up to his offer and donated thousands in the blink of an eye. (much to my awe, amazement and slight embarrassment) before popping off to sleep.’

However, proving his doctors wrong, he saw in his 21st birthday. Unfortunately, he was then left facing more bad news; more tumors were found in his chest.

This sparked his search for new treatment.

In the article, Eastmond wrote of his thanks for ‘the kindness, generosity and love’ the LGBTI community has given him in his battle so far.

He’s recently been recognized by Attitude magazine’s Pride Awards for his campaigning as an LGBTI activist.

His powerful cancer story, he has been writing about throughout treatment, is inspiring people far and wide. His friends put a video together about his journey for London Pride:

In what is becoming a signature spirit, he signed his most recent post off with a powerful message of defiance: