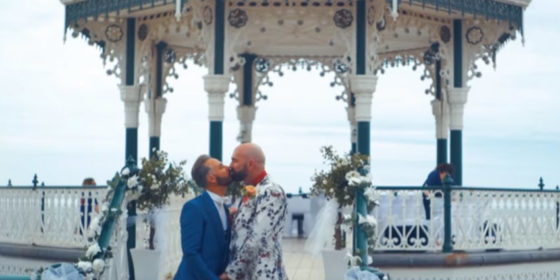 The couple released a video celebrating the day and as ‘a tribute to all of their heroes who fought so hard to give them the freedom to live as themselves, as well as the freedom to marry’. Shot and edited by Amber Rose Morgan, the video is sure to grow any heart three sizes. It has nearly 9,000 views and you can view it below.

‘If you said to either of us, one day you’re gonna stand in front of your family and friends, and declare your love for each other and marry the man of your dreams, we would never have believed you,’ says Tony in the video, as the two declare ‘I do’. The two have taken the last name Butland-Steed.

The two initially met online and kept in touch for four years without ever meeting. Then, in 2013, happenstance brought them together three times over two weeks at a charity event in Brighton. They hit it off and never looked back.

Grab a handful of love

In speaking to Gay Star News, Chris gushed about the day: ‘Our wedding day totally surpassed anything we could have imagined in our wildest dreams!’

Featuring a disco ball, plenty of dancing, and the beautiful Brighton coast, the video is a celebration of their love.

‘The main thing that all our guests mentioned was that they’ve never been to a wedding and felt so much love, not just from myself and Tony, but from everybody there,’ continued Chris. ‘One friend said you could almost reach out and grab a handful of the love as it was almost tangible!’

‘I think they’re the most perfect couple made for each other,’ a guest reaffirms in the video.

‘We never imagined that society would accept us’

Ringing true of many stories within the LGBTI community, Steed and Butland faced their share of obstacles.

‘Back then, we never imagined that society would accept us, let alone think about getting married to the man of our dreams one day. It makes us sad that there are still many in our country, and around the world who can’t ever see that happening to them.’

Actively involved in the community, the couple supports both local and national charities. Chris volunteered for Peer Action, a local Brighton HIV charity. Tony, meanwhile, is member of the Brighton Gay Men’s Chorus since 2007.

‘Although many things have changed in our society, there are still many people who struggle with coming out as the thought of coming up against the prejudice that still exists is scary,’ finished Chris, clearly moved and looking forward to the future. ‘Hopefully our video will help these people see that dreams do come true.’