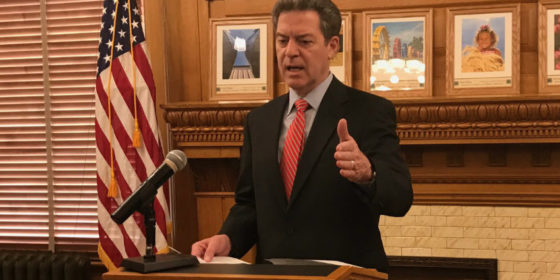 Donald Trump nominated Kansas Governor Sam Brownback, known for his anti-LGBTI stances, as a global ambassador for religious freedom. The news comes on the heels of Trump’s proposed trans military ban and the Justice Department ruling the 1964 Civil Rights Act does not protect members of the LGBTI community.

First created in 1998, the ambassador role is intended to promote ‘religious freedom as a core objective of U.S. foreign policy,’ according to the US State Department.

Brownback has long been an advocate for religious freedom at the expense of the LGBTI community. In 2016, he signed the Campus Religious Freedom Bill, which allows religious student groups to block membership based on ‘religious beliefs’. This includes discriminating against LGBTI students from joining.

Previously, he signed laws protecting clergy who do not participate in same-sex marriages, removed protections for LGBTI state employees, and attended an anti-marriage equality rally.

LGBTI policy in Kansas is so bad under Brownback that California banned state-funded and sponsored travel to the state, along with North Carolina, Mississippi, and Tennessee.

Religious Freedom is the first freedom. The choice of what you do with your own soul. I am honored to serve such an important cause. -SDB

‘We do not wish him upon the world’

However, other politicians and groups oppose the nomination.

House Minority Leader Jim Ward, a Democrat, said Brownback ‘left a lot of carnage and destruction,’ while Rep. Kathy Wolfe Moore, a Kansas City Democrat, said ‘the last seven years have been anything but successful’.

Equality Kansas, a group with a mission to end discrimination, urges the Senate to oppose his nomination. They released a statement, saying: ‘We do not him upon the world.’ Read the full statement in the tweet below.

Gay Star News reached out to Gov. Brownback’s office for a comment.