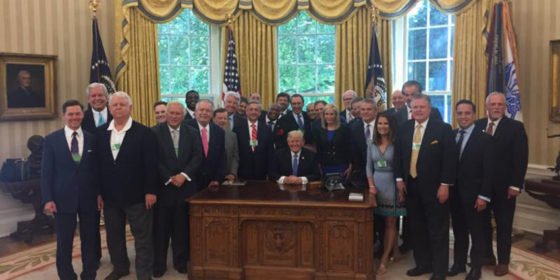 President Donald Trump has refused to even acknowledge the LGBTI community since stepping into the Oval Office.

Not choosing to declare June Pride Month, or provide assurances LGBTI rights will be protected, has some Americans very concerned.

And now this has become even worse after he met to pray with extremely homophobic members of the far Christian right.

‘President Donald Trump, who has remained out of public view since returning from Europe late Saturday, welcomed evangelical leaders into the Oval Office on Monday for a prayer session,’ CNN reported.

The members at the prayer meeting included Tony Perkins, President of the Family Research Council, who wants the GOP to support ‘gay cure’ therapy and has claimed LGBTI rights activists want a ‘Christian holocaust’, and pastor Jim Garlow, a driving force behind his state’s anti-same-sex marriage Prop 8.

‘It shows a substantive relationship between the evangelical community and this administration,’ Johnnie Moore, a former senior vice-president at Liberty University, told CBN News.

Such an honor to pray within the Oval Office for @POTUS & @VP . pic.twitter.com/JrDOSJyFeN

‘We enjoy an open door, not just in the Eisenhower Building, but in the West Wing.’

Former Republican congressman Michelle Bachmann, who has called on Trump to fight against the ‘gay agenda’, was also in attendance.