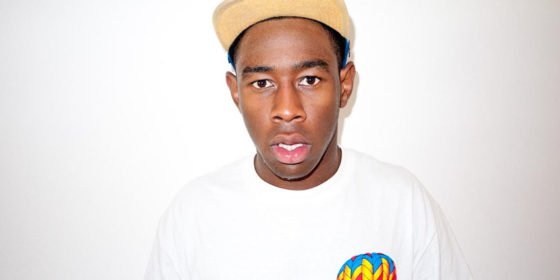 Tyler, The Creator has appeared to come out on his new album Flower Boy.

One line has revealed the rapper, and Odd Future co-founder, has got fans wondering if he has announced to the world that he’s gay or bisexual.

And on Garden Shed, where Estelle is featured, he raps about a forbidden live and his friends not knowing he was keeping something inside.

‘That was real love I was in, Ain’t no reason to pretend’ he says on the track before saying ‘All my friends was lost / They couldn’t read the signs / I didn’t want to talk / I tell ’em my location and they ain’t want to walk’.

This is even more surprising because he has been accused of rampant homophobia in the past.

Real name Tyler Gregory Okonma, he used the word ‘faggot’ and its variants a total of 213 times on his 2011 album Goblin. This led, according to his Twitter, to him being banned from the UK for the homophobic lyrics.

But it does appear, at least from Tyler’s social media, he’s also been out for quite a while.

This would make Tyler the third Odd Future member to come out.

Syd, a R&B artist and record producer, is a gay woman who decided to reveal her sexuality in The Internet’s Cocaine video.

And Frank Ocean decided to come out in an open letter in 2012, saying his first love was with a man.

At the time, Tyler the Creator wrote to him: ‘My Big Brother Finally Fucking Did That. Proud of that N***a Cause I KNow That Shit is Difficult Or Whatever.’

Flower Boy, which features a guest appearance from Ocean, is out on 21 July.