Ugandan police have raided and shut down a queer film festival that they were tipped off about in Kampala.

A LGBT+ film festival in Kampala, Uganda, has been closed down by police after a sold-out first night. ﻿

The second Queer Kampala International Film Festival had been set to run between 8 and 10 December.

But police attended on the first night with the intention of arresting organisers, reportedly after being tipped off about the event’s location.

Organisers had been forced to find an empty warehouse as there were no venues willing to host the event.

The event’s location is normally kept secret in order to protect its attendees.

But organisers were told just before 2pm on Saturday that police were on their way and would be there within 30 minutes.

Police turned up armed with AK-47 rifles and the event was shut down.

Some reports suggest that organisers were safe and have not been arrested but this has not been verified.

A message on Facebook from organisers reads: “The LGBT Film Festival in Uganda which started yesterday has been raided by the Uganda police. The organizers advice all our members not to go to any of the secret venues because It’s riskier at this time because the people who informed police about our secret venues are members of Ugandan LGBT organizations who don’t want the festival.”

The US embassy in Uganda earlier this year condemned the forced cancellation of a Pride event.

Uganda Pride, which had been expected to take place this month, was cancelled abruptly over the weekend, as LGBT activists said they had been warned they faced arrest if the event went ahead.

In an article for the Guardian, one of the event’s organisers Frank Mugisha said it had been “crushed” after threats from Uganda’s minister of ethics and integrity Simon Lokodo.

Lokodo has previously publicly threatened to arrest anyone who celebrates LGBT rights in public.

Under Uganda’s archaic penal code, “carnal knowledge against the order of nature” between two males carries a potential penalty of life imprisonment. 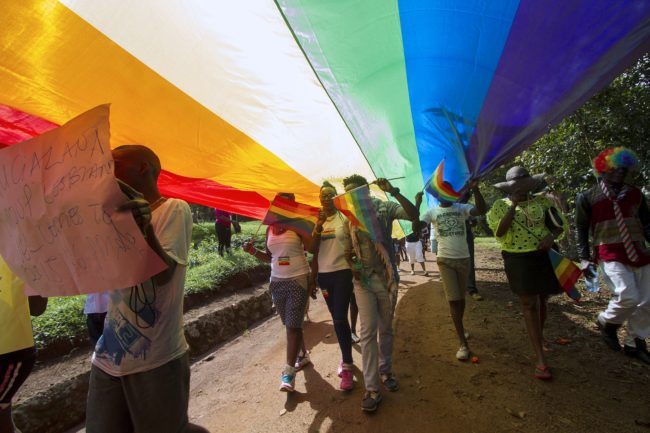 A harsher anti-gay law was signed into law in 2013, but it was later thrown out by the country’s Supreme Court on technical grounds.

In a statement, the US Embassy in the country slammed the Ugandan government.

The statement, released by US Ambassador Deborah R. Malac, reads: “The U.S. is disappointed with reports that the Ugandan government has forced the cancellation of LGBTI Pride Week events.

“Under Uganda’s constitution, all individuals and organisations have right to associate freely in private and in public, without fear.

“It is responsibility of the Govt to ensure that human rights of all citizens, including LGBTI citizens, are respected and protected.”

Mr Mugisha, the head of Sexual Minorities Uganda, wrote in the Guardian: “Pride 2017 was crushed. Our efforts to engage with the state fell on deaf ears.

“Lokodo threatened us with arrest, even violence, and the police were reportedly ready to surround the venues we had booked. The event was meant to begin last week, on 16 August.

“But we were left with no choice but to cancel. Our community is still traumatised by the arrests and detentions that took place last year. We couldn’t risk a repeat.”

He added: “It took the murder of my friend David Kato and the threat of the death penalty against LGBT people for the international community to take notice of our plight.

“Now it feels like the LGBT community is becoming invisible again, and not just to Ugandan society. We need the British government, the EU and the US to keep talking to the Ugandan government.

“We need the persecution of LGBT people to be on the agenda of the Commonwealth heads of government meeting next year. And we urge the EU to appoint a special representative on LGBT rights.

“The fact that we have been forced to cancel Pride Uganda is one more sign of our growing invisibility.”

Mr Lokodo has previously made shameless attempts to link gay rights activists to paedophilia and prostitution.

Justifying his homophobic campaign, he claimed: “We are aware that there are inducements, including money, being offered to young people to promote the practice.“