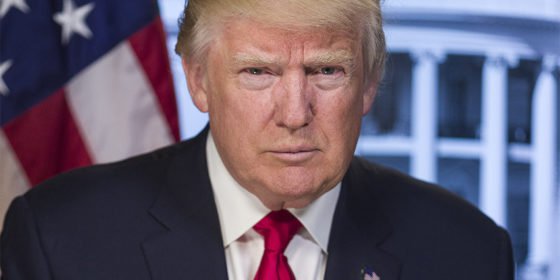 Trump broke the tradition of his predecessor, Barack Obama, who had issued proclamations kicking off the month in June during each year he was in office.

It’s not that Trump wasn’t busy signing other proclamations today.

Obama had also made a tradition of opening the White House up for several celebrations with the LGBT community.

That also appears to have been done away with.

‘There is no reception on Trump’s agenda, and the absence of a Pride Month proclamation is quite conspicuous,’ Zack Ford at ThinkProgress writes today.

Ford points out that Trump ‘could have become the first Republican president to acknowledge Pride Month with a proclamation, but he didn’t — and the silence is deafening.’

During his campaign for the presidency against Democrat Hillary Clinton, Trump stated that he would be the most pro-LGBT president ever.

He also tweeted less than a year ago: ‘Thank you to the LGBT community! I will fight for you while Hillary brings in more people that will threaten your freedoms and beliefs.’

Nancy Pelosi, the Democratic leader in the US House of Representatives, issued a statement today that included a blistering attack on the Trump administration’s record on LGBT issues so far. ‘LGBT Americans face an assault on their rights from the White House and House Republicans, who are gutting HIV prevention and treatment initiatives, dismantling protections for transgender children in public schools and conspiring to render LGBT Americans invisible in the census,’ Pelosi stated.

‘These hateful, discriminatory attacks dishonor our nation’s most sacred ideals of liberty and make passage of the Equality Act – which would bring the full force of the Civil Rights Act to secure equality for LGBT people – even more urgent.’