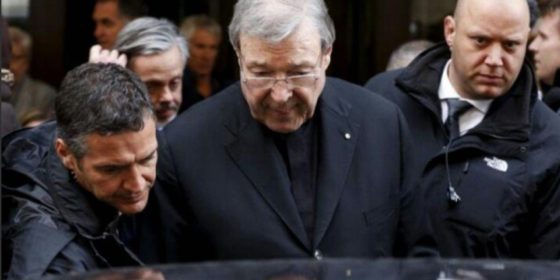 A Cardinal charged with sex offences has said he ‘look forward to his day in court’.

Australia’s highest ranked Catholic and the Vatican’s Finance Minister has been charged with multiple counts of historical sexual assault offences.

‘There are multiple complainants relating to those charges.’

The offences allegedly occurred between 1976 and 1980 in Ballarat and then between 1996 and 2001 in East Melbourne. He was ordered to face Melbourne Magistrates’ Court on July 18.

‘The fact that he has been charged on summons — we have used advice from the Office of Public Prosecutions and also we have engaged with his legal representatives, which is common and standard practice.’

In July 2016 police confirmed it was looking into allegations of misconduct by the Cardinal but he denied them saying they were part of a media smear campaign.

‘The allegations are untrue, I deny them absolutely,’ he said at the time.

The Vatican’s Holy See Press Office released a statement confirming Pell would return to Australia ‘as soon as possible, to clear his name’.

He is due to make a further statement at 8.30am (Rome time).

‘He is looking forward to his day in court and will defend the charges vigorously,’ the Holy See’s statement said.

Victoria Police flew to Rome where Pell lives in October to interview him about the allegations. Police said he had cooperated with the investigation.

While Australia does have an extradition treaty with Italy, it does not have one with the Vatican. The Vatican is the world’s smallest nation-state and home of the Catholic Church.

Cardinal George Pell was ordained as a Priest in the early 1970s and he returned to Ballarat to work as priest after studying in Rome and Oxford.

He became the Archbishop of Melbourne in 1996 and was made a Cardinal in 2001.

As head of the Vatican’s finances, Pell is considered number three in the Catholic hierarchy behind the Pope.

Last year, Pell claimed he was too sick to return home to Australia to give evidence at the Royal Commission into Institutional Responses to Child Sexual Abuse. He instead gave evidence via a video link from Rome.

Watch the video of the police press conference