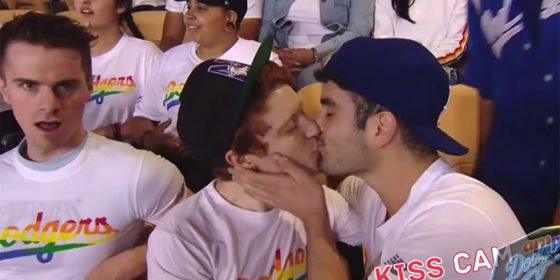 The kiss cam was out in force at the Los Angeles Dodgers game last Friday.

With 8,000 people in attendance, it was the most tickets ever sold by a team for a single Pride night.

Lon Rosen, the executive vice-president and chief marketing officer for Dodgers, said they organization has a ‘long-standing relationship with the LGBTI community’.

‘[We have been able to] make our relationship with the LGBT community more than just a one night promotion.’

Dot Marie-Jones, from Glee, performed at the show.

In addition to the Kiss Cam, gay, bi and trans choirs sang the National Anthem and LGBT people threw out the opening pitch.

The Varsity Gay League played a kickball game in the outfield before the game, and the team created T-shirts with the Dodgers logo in rainbow colors.

‘Pride Night’ was mentioned during in-game announcements and signs about Pride Night were posted in the stadium.