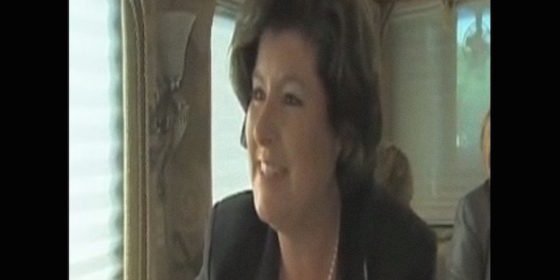 Karen Handel, the Republican winner of Georgia’s recent congressional election, has a long history of dismissing LGBTI rights. Last week, we saw Handel tell a mother of an LGBTI child that her ‘faith’ calls her to stop same-sex couples from adopting children. Now, video clip from 2010 which shows Handel literally laughing at the idea of supporting same-sex marriage and adoption has resurfaced.

‘So you have said that you are against gay marriage,’ Richards stated.

‘Absolutely,’ Handel replied. ‘Marriage is between one man and one woman.’

Handel went on to say that she voted no on the idea of benefits for domestic partnerships and that she’s against civil unions.

Richards asked why she believes that marriage is between one man and one woman. Handel scoffed at this.

‘Why is marriage between one man and one woman?’ she repeated. ‘Are you serious?’ she laughed. She cited her Christian faith, saying ‘gay relationships’ are ‘not what God intended.’

The conversation shifted to same-sex parenting. Richards asked her why she believes that ‘gay parents are not as legitimate at heterosexual parents.’

‘Because I don’t,’ she replied. She then told Richards that he needs to ‘move on’ as she didn’t want to ‘spend the whole day discussing this.’

Watch the interview clip below:

Since the early 2000s, Handel has had a ‘complicated’ relationship with LGBTI rights. Project Q Atlanta reports that as a Fulton County Commission candidate and chair, Handel ‘sought out LGBT support and became a member of the Log Cabin Republicans. As chair of the commission, Handel supported a grant for a non-profit that helped LGBT youth.’

Yet in 2006 when Handel was elected Georgia secretary of state, she changed her stance by disavowing same-sex partnerships. This anti-LGBTI stance followed her through her 2010 run for governor of Georgia. In 2014, she suggested that being gay might be a choice during a Republican primary for a United States Senate position.