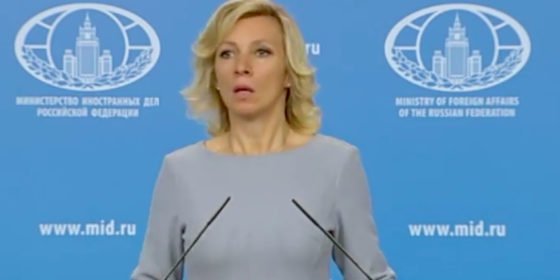 Russia’s Ministry of Foreign Affairs really does not want to talk about Chechnya, it seems.

At least that is what a video showing one of their spokespeople arguing with a journalist suggests.

Erkka Mikkonen, a journalist working for Finnish broadcaster Yleisradio, asked about the plight of gay men in Chechnya during a press conference on Wednesday (31 May).

Prior to asking his question, Mikkonnen made a joke calling the Chechnya situation the ministry’s ’favorite subject’.

That already did not go down well, with the spokesperson insisiting: ’It is your favorite subject’.

Mikkonen then asked where the Ministry stood on two key questions.

‘As you know, in the West this situation causes concern, which last time was shown in Paris [when French President Emmanuel Macron met Vladimir Putin],’ he said.

‘As Chechnya is part of Russia, I wanted to ask you: do you agree with the Chechen claims that there are no homosexuals in Chechnya?

‘And how does this situation in general affect the relations between Russia and the EU?’

Instead of answering, the woman asked Mikkonen for his name and employer, before turning straight to the camera to address Chechen president Ramzan Kadyrov.

‘Dear Mr Kadyrov, today at our briefing there is a representative of Finnish television, Erkka Mikkonen,’ she said.

‘He is very interested in the subject of the presence of gays in Chechnya – or their absence.

‘This is not a question for a Foreign Ministry spokesperson.

‘Could you organize a trip to the Chechen Republic for this particular journalist? [T]here he will be able to find answers to all his questions.’

She then turned to Mikkonen and said she had done ‘everything I could’ and told him to take his question to Chechnya directly and to speak to NGOs and the government.

‘Why do you politicize this subject,’ she said.

‘Why do you come to the Ministry of Foreign Affairs and beging to talk on your favorite subject?

‘I understand that it is your favorite subject. But again, there is Chechnya, go there and write a good article.’

But Mikkonen did not back down, and asked whether he could take her answers as a refusal to answer.

He also repeated his question, but the spokesperson still refused to answer. Instead she told him once more to go to Chechnya.

She repeated the same statement less than a minute later, after Mikkonen said he had already conducted interviews with survivors hiding out in Moscow, and once more at a later time.

When the briefing ended, the spokesperson turned to Mikkonen and asked whether he was getting ready to go to Chechnya.

Mikkonen just replied he did not get an answer.

‘What answer? You for the main thing – you got an invitation,’ the spokesperson said.

‘Little remains to be done – to get ready. But you aren’t afraid, are you?’

She later said Russia ‘would take care’ of Mikkonen and take him to Chechnya.

But that still was not the end of it.

When Mikkonen asked whether he should be afraid, the woman said he should decide for himself, before bringing out the ‘fake news’ claims.

‘Do you want to get true information or – so to say – discuss rumors,’ she said.

‘And this is what unfortunately happens in foreign media.’