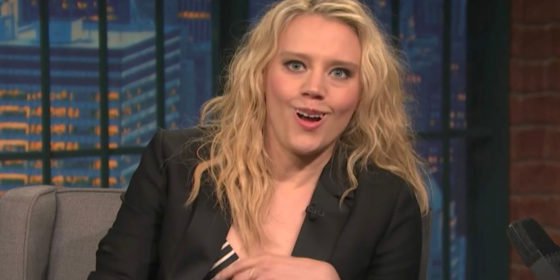 Saturday Night Live off on summer hiatus and yet the Trump administration keeps providing comedic fodder.

So Kate McKinnon took the opportunity to reprise her impersonation of US Secretary of State Jeff Sessions during a visit to Late Night With Seth Meyers on Tuesday (13 June).

The out performer was on the show to promote her new comedy Rough Night but the topic turned to Sessions who had testified before members of the US Senate Intelligence Committee earlier in the day.

The Emmy winner demonstrated how she came up with what she calls the ‘Grinch mouth’ she uses when inhabiting the Sessions character.

‘It began as a joke pitch then it just sort of happened,’ she says of creating the parody.

‘What I noticed is he’s got this funny little mouth … like a turtle’s little mouth. I’d been trying to use (the mouth) and then he popped into the world and I thought, “Oh my gosh! I’m gonna use it!”‘

During her reenactment of Sessions’ testimony, McKinnon fake sneezes three times and in place of ‘Excuse me!’ she hilariously says ‘Recuse me!’