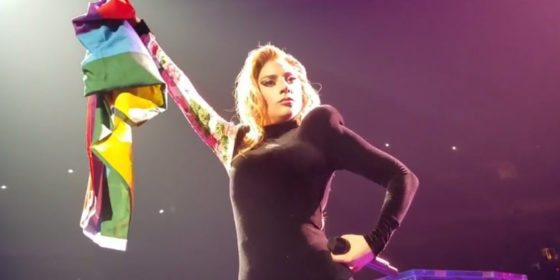 Lady Gaga had a message for her LGBTI fans Monday night. At the opening night concert of her Joanne world tour in Vancouver, Canada, the singer took a moment out of performing to speak to the audience. Watch the full moment below.

Midway through the night, a fan threw a Pride flag towards the stage. Gaga asked security to hand the flag to her and she held it up with a triumphant pose. The audience proceeded to cheer excitedly as she remained still, proudly holding the flag.

‘Needless to say, I have a lot to say about this issue,’ the singer told the crowd. She draped the flag over her piano bench. Then she quoted her song Come to Mama: ‘But the most important thing that I have to say about it is that everybody’s gotta love each other. You got to stop throwing stones at your sisters and your brothers. Cause now, it wasn’t that long ago we were all just living in the jungle.’

Gaga, who is openly bisexual, has long had a strong LGBTI fan base. Her song Born This Way is something of an adopted anthem for the community.

Before completely diving into the song, she once more spoke to the crowd: ‘So for any of you who don’t believe in equality here this evening, come to mama.’

Gaga is a long-time advocate for the LGBTI community.

Last week, when Trump tweeted his proposed transgender military ban, Gaga was quick to take her thoughts to Twitter. ‘The message you have just sent has endangered the lives of people all over the United States and overseas bravely serving our nation @POTUS,’ she tweeted. She continued, discussing suicide rates and mental health, before finishing with: ‘Within the Trans Community are many also who are strong & brave. They should be able to serve if they wish. To have honor if they do @POTUS.’