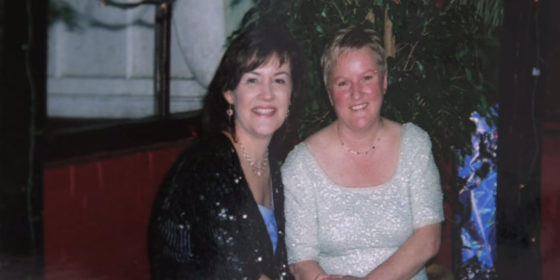 ‘Twenty years ago, my mum came out as a lesbian,’ Jillian says at the start of BBC Newsbeat’s new documentary, My Lesbian Mums.

Jillian’s mothers, Susan and Gerrie Douglas-Scott, were the first lesbians to marry in 2014 when same-sex marriage became legal in Scotland.

‘For me my fear was that the children would be bullied,’ Gerrie says in the film. Between the couple, they have five children. Susan has Jillian, the youngest, and her older brother Jamie. Gerrie has three daughters — Elaine, Mary, and Anne. She continues: ‘I’ve had some horrendous stuff on social media from strangers. They call it an abomination and other names like that.’

Cool to have lesbian mums

It was different still for Elaine’s older sister and Gerrie’s oldest, Anne. ‘I was 17,18, I was at university, it was actually kind of cool to have lesbian parents,’ Anne says. ‘And it was at the whole time of Friends and Ross and Carol and Susan. I was like, “Hey, my new mum’s called Susan too!”‘

‘I think there’s still a lot to change,’ Jillian discusses with Anne. ‘Maybe in another 20 years, it will be completely different again. I think our mothers helped pioneering the change.’

Adam has two children, Tyler and India, from his previous heterosexual marriage. He’s now married to Conor, who says the couple ‘doesn’t make a big thing out of it’.

‘We had a lot of questions from them and we still do,’ Adam says. ‘Every now and again, usually at bedtime, I’ll get: “Daddy, why do  you kiss Conor? Boys aren’t supposed to kiss boys.”‘

He also discusses how to explain to his children why he’s not with their mother anymore and his fears of bullying. ‘I don’t know any other gay couples with kids from a separate marriage.’

The documentary is available to watch on BBC iPlayer and YouTube (below).