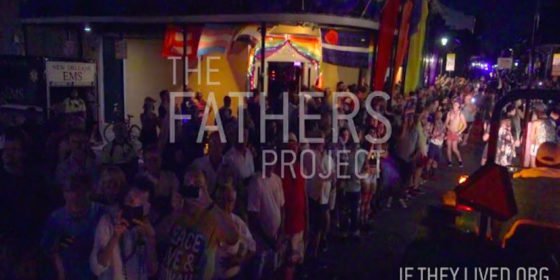 Leo Herrera, a gay Mexican director, is working on a new project that imagines what life would be like for LGBTI people if the AIDS epidemic had never occurred.

The short film, Fathers (or The Fathers Project), is funded entirely by individual donors and art supporters. Herrera has been working on the project for almost two years and started filming across the United States this month.

The film combines elements of real-life and fantasy, even being described as sci-fi. Featuring LGBTI artists, historians, activists, and performers, the movie explores the political and cultural influence the LGBTI rights movement could have had if so many important figures hadn’t become part of the ‘lost generation’ who perished from AIDS.

‘Now more than ever, it’s crucial we keep our history alive. There are many lessons in our past that will get us through our current political situation,’ Herrera told UnicornBooty. ‘It’s also important to keep AIDS in our imagination, because it’s the only way we’ll find creative solutions to repair the damage it did to our culture.’

For Herrera, it was important to document the impact many queer people of color had on the movement, especially as HIV and AIDS are still mostly affecting poor communities of color.

‘If AIDS hadn’t killed so many of our activists and used up so many resources, we could have focused our energies on other fields. Our marginalized communities, especially our trans family and folks of color, could have more effective ways to take care of one another in healthcare, education and immigration,’ Herrera says.

Watch the two trailers for Fathers below: