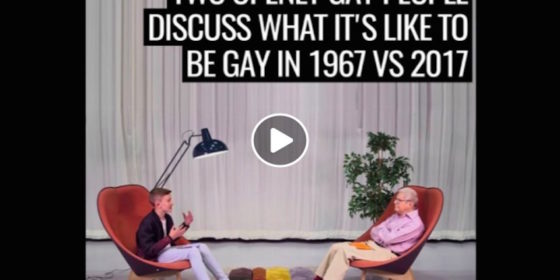 A 13-year-old boy and 78-year-old man interview each other about what it’s like to be gay 65 years apart.

The 78-year-old came out when he was about 16, meanwhile the 13-year-old has already had a boyfriend.

The 13-year-old’s parents were accepting of him and told him they’d love him whether he was gay or straight. But the 78-year-old gave him a little history lesson about how this wouldn’t have always been the case.

‘Right up until 1967, it was illegal,’ he explains. ‘And you had to be very careful because if you had a boyfriend or something and you were spending the night with them, the police could come and knock on your door. And because you were in bed with him, they could charge you. Whereas now, that would never, ever happen. You would never consider it at all.’

‘So I envy you,’ the 78-year-old continued. ‘In that sense I mean that in one’s youth it would have been wonderful to just think it doesn’t matter a damn. You could just enjoy yourself and be yourself.’

The 13-year-old was dumbfounded upon learning about this. ‘It amazes me how they could even say for loving someone, you’re being arrested,’ he said. ‘That completely shocks me.’

As for advice for the future, the 78-year-old tells the 13-year-old to be true to himself, to stand up for being gay, to ‘actually try to make people understand that the most important thing is that you can love somebody. It doesn’t matter who they are, whether they’re a boy or a girl, love is love. And that’s something that is enriching. And to try to get people to think beyond their own immediate sphere so that we can all be neighbors in the world and to not have enemies,’ and to be supportive.

Watch the full interaction below: