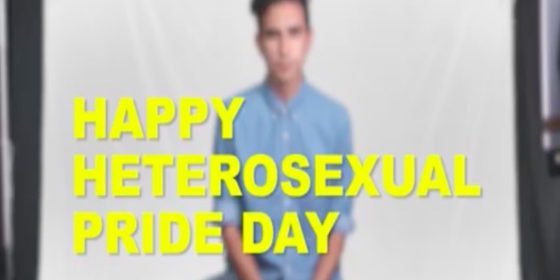 Every Pride month, straight people with a fundamental misunderstanding of the plight of LGBTI people around the world ask: ‘why isn’t there a heterosexual pride day/month?’

Well now, thanks to New York-based video creator Dylan Marron, a tribute to Heterosexual Pride exists for all to watch.

Marron discusses the history of heterosexuality, starting with the first heterosexual couple – Adam and Eve. When they walked out of the Garden of Eden, Marron says, it was the first documented ‘straight pride parade.’

Marron goes on to talk about the heterosexual invention that is the media, before talking about the LGBTI community.

‘In the 20th Century when gay people were invented to threaten their love they found ways to become even more divisive,’ he says.

‘Thanks to the bravery of straight people throughout history, you can see heterosexual pride parades throughout all parts of the world literally any time a man and woman walk down the street, unafraid to hold each other’s hands.’

Watch the hilarious satirical video below: