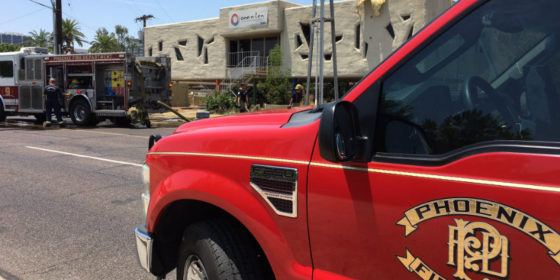 In an alarming new video, a young man is seen setting an LGBTI youth center in Phoenix, Arizona on fire.

Carrying a red can of gasoline, the man looks around inside the center as he casually pours gasoline over the building before leaving. Moments later, a massive flame erupts, spreading across the rooms. The fire occurred on 12 July and although no one was hurt, the center, run by a group called One-n-Ten, was wholly destroyed.

Authorities identified the suspect as Darren William Beach Jr., 26, asking for any help in finding him.

One-n-Ten made a disturbing realization after watching the video: the suspect used the center’s services.

In a statement released on their website, the organization wrote: ‘Obviously this young man has issues and needs help. He began utilizing one-n-ten’s services beginning in 2013, and aged out of our programs  in early 2016 once he turned 25 years old. We also understand he had sought services at other organizations throughout the valley.’

‘This news hurts,’ said executive director Linda Elliott in a news conference. ‘Someone that you’ve provided services to and helped out, you just would not expect to come back to your center and do this sort of thing.’

She also acknowledged the trauma the center’s youth now face. ‘Many of them knew this young man, and this is their safe place,’ she lamented.

‘Proud to be part of the Phoenix community’

Founded 24 years ago, One-n-Ten operates with a mission ‘to serve LGBTQ youth and young adults ages 14-24’. The center served about 1,000 people a year, providing a safe and empowering space for youths.

Earlier in the month, the group posted on Facebook the center would close indefinitely. In a good turn of events, however, that is no longer true.

Helping the transition is Brittney Griner, a WNBA player for Phoenix Mercury. Actively involved in Phoenix’s LGBTI community, previously volunteering at One-n-Ten, Griner is awarding the center with a $5,000 donation. She won June’s WNBA Cares Community Assist Award, awarded monthly, for her work supporting homeless and LGBTI youth in the city. As the winner, Griner decides the recipient of the donation. She will present the check to Elliott before Sunday’s game against the San Antonio Stars.

The Phoenix Mercury is donating an additional $1,000.

For now, One-n-Ten is operating out of a temporary location. They anticipate opening a new, permanent center in September.