It’s official: David Hockney’s recent retrospective at the Tate Britain is the gallery’s most-visited ever.

A staggering 478,082 people went to see the exhibit (including yours truly) in London this spring.

We previewed the collection, containing some of the openly gay British artist’s most famous work, back in February.

Among them is the iconic ‘Portrait of an Artist (Pool with Two Figures)’ and ‘A Bigger Splash’.

Many of the works feature cute guys, such as ‘Peter Getting Out of Nick’s Pool’, pictured above.

One piece fusing painting with Hockney’s other great love, photography, even contains a blink-and-you’ll-miss-it appearance from Tom Daley and Dustin Lance Black.

The couple made sure to catch the exhibit themselves, with Milk screenwriter Dustin sharing a selfie of the pair in front of A Bigger Splash. 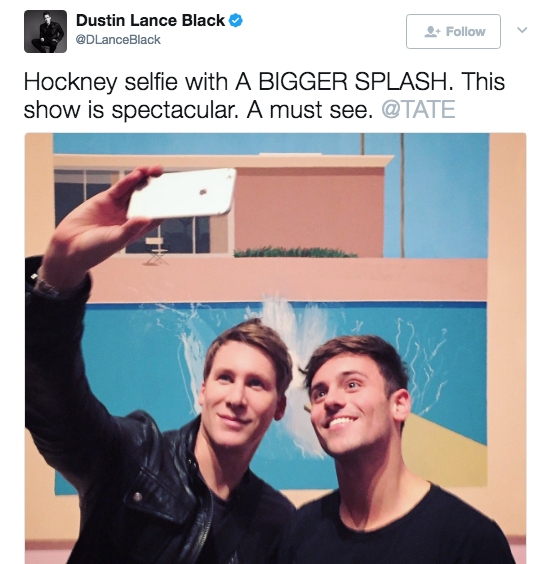 Of course much of Hockney’s art, like the moving ‘We Two Boys Together Clinging’, explores themes of homosexuality.

Hockney is also known for his intimate portraits, such as this one of his late parents, Laura and Kenneth.

The exhibit attracted an average of over 4,300 visitors each day, with 35,000 advance tickets sold. To cope with demand, the gallery was open until midnight over this past weekend.

Commenting, Director of the Tate Britain Alex Farquharson said: ‘Tate Britain is the home of British art and the perfect place to showcase one of our greatest living artists.

‘The response to this retrospective – the first in 29 years – has been incredible.’

He furthermore added: ‘It is wonderful that so many people have had the chance to see it, and that they found the exhibition so exciting, thought-provoking and moving. We look forward to many more people seeing the exhibition when it travels to Paris and New York.’

Elsewhere, another Tate exhibit currently on of interest to LGBTIs is Wolfgang Tillmans 2017. The Tate Modern’s celebration of the openly gay former Turner Prize winner from Germany closes on 11 June.

What’s more, back in the Tate Britain is Queer British Art 1861-1967. This major collection of works by and inspired by LGBTIs is on display until 1 October.