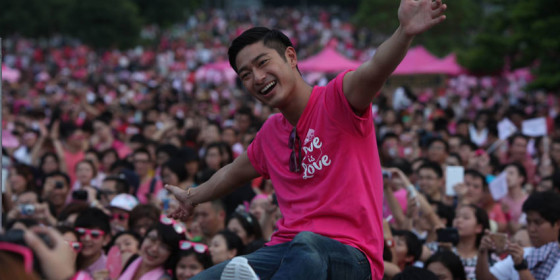 The city boasts five of the world’s top 30 tallest buildings, including the ICC which holds the Ritz-Carlton hotel and O-zone, the highest bar in the world on the 118th floor.

The world’s largest outdoor, seated Buddha – helpfully referred to locally as the Big Buddha – can be found on Lantau Island, just a short train and then cable car ride away from the heart of the city.

Another exciting ride can be found at the Peak Tram which is the world’s steepest tram ride, whisking you up to Victoria Peak for spectacular views over Hong Kong Harbour both day and night.

Every evening Victoria Harbour is lit up in the world’s largest permanent light and sound show which illuminates all the erections straddling both sides of the water.

Other major sights include the 10,000 Buddhas monastery in Sha Tin, and the beautifully landscaped Kowloon Walled City Park.

Hong Kong is also home to some other world records:

Navigating your way around Hong Kong is easy to do either via the public transport system, or taxis are a relatively affordable option.

Hong Kong’s nightlife is a lot of fun – this is a great city to go out in. There’s bars on the Kowloon peninsula that are popular with the locals; If you’re on Hong Kong Island then check out:

Most events that have an LGBTI perspective tend to happen from October to December.

With a hot and humid climate for most of the year it’s important that there are places to cool off and HK has plenty of pleasant beaches, including a few gay ones. The most popular are on HK Island at Middle Bay and South Bay, and also there is a fine stretch of clean sand at Cheung Sha.

If you like to shop then Kowloon offers a number of markets. By day there is the Ladies Market, which confusingly also sells stuff for men; and the Temple Street night market which gets going about 7pm until midnight. These markets get crowded, but realistically pretty much everywhere in Hong Kong is pretty crowded.

One of the highlights of any visit to Hong Kong is the food. The local cuisine is Cantonese, but this is a truly international city so whatever you’re looking for and whatever your budget you’ll be able to find something to satisfy you.

This article has been produced on an editorially independent basis. It contains affiliate links. If you click on an affiliate link and make a booking, Gay Star News will receive monetary compensation.