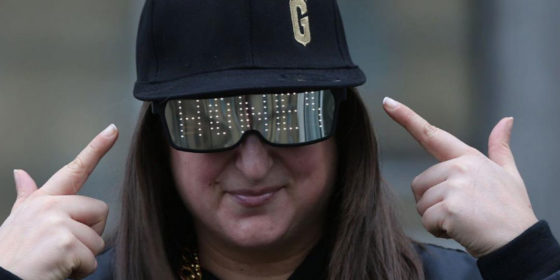 She also posed for some very revealing photos, but all in her snapback hat and shades.

She said: ‘I feel now is the right time to let everyone know that I’m gay.

When asked why she chose to wait until after her stint on the reality television show, Honey G said: ‘I was just a bit worried about people maybe being homophobic.

‘I wasn’t ready to come out to the public at that point,’ she added.

The X Factor rapper revealed Simon Cowell asked if she had a boyfriend during her audition.

But she just said no and she was single.

Honey G: ‘I’m definitely looking for that special someone’

‘I wasn’t really ready at that point to announce my sexuality to the world,’ she said. ‘I’m definitely looking for that special someone.

‘I do really want to have kids as well, since I was 19. I’d like to have kids, get married and settle down,’ she revealed.

Honey G said: ‘I like more feminine women, but beauty comes from within.’

She said her ‘type’ is someone like Queen Latifah, Fleur East, Kristen Wiig and Melissa McCarthy.

She also opened up about body confidence issues: ‘I wasn’t sure if I’m a sex symbol.

‘And I don’t really have a size eight body so I was a little bit worried.