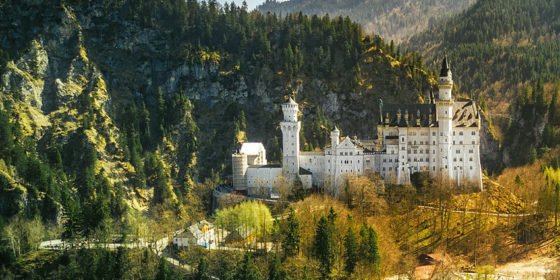 The country is to become the next in Europe to offer same-sex marriage, after today’s vote to legalize it.

According to president of parliament Norbert Lammert, 393 voted in favor, 226 against, while seven abstained or were absent.

Gay marriage should be available in Germany, home to Europe’s largest economy, by the end of the year.

Here, we celebrate with 12 of the sweetest spots for a wedding, honeymoon or a simple romantic moment in this magical land of castles and cobbled streets…

What: The largest warehouse district in the world.

Why: It’s inexplicably, serenely beautiful. Also, it’s an excuse to get out on Hamburg’s many canals – it has more than Amsterdam and Venice combined.

Where: Königswinter, near the city of Bonn in the East of the country.

Where: East Germany, driving distance from Nuremberg and Frankfurt.

Why: For the charm of its traditional half-timbered houses.

Good morning #Berlin. On a clear day the visibility from the #tvtower can reach up to 42 kilometer. Have you ever tried walking up to the visitor platform? How many stairs do you need to take to get this amazing panorama view? Gorgeous picture @photohod #visitgermany #discovergermancities #mustsee

What: The tallest structure in Germany.

Where: Berlin, of course!

Why: Because there’s a great restaurant at the top with lovely views of the city.

What: A hilltop palace fit for a Disney Princess (or rather the late King Ludwig II of Bavaria, widely believed to have been gay) dating back to 1869.

Where: The state of Bavaria, a couple of hours outside Munich near the Austrian border.

Why: Just look at it!

Where: Also in Bavaria, an hour from Neuschwanstein Castle.

Why: Because no trip to Germany is complete without a dip in one of its 311 lakes.

What: A striking hairpin bend in the River Saar.

Where: The state of Saarland.

Why: Because you can take it in from the top of Baumwipfelpfad – a wondeful 1,250 meters long, 20 meter tall staircase/slide combo!

Why: Because it’s gorgeous inside and out, and its history dates back to 1385.

Where: The city of Bremen, near the River Weser in the country’s Northwest.

Why: Because it’s the perfect place for a loved-up photo.

Where: Munich once again.

Why: To experience the absolute epitome of Baroque style.

What: A gorgeous park covering 200 acres.

Where: The municipality of Gablenz near the Polish border.

Why: The circular optical illusion of the Rakotz Bridge is pure magic.

Where: South of the country.

Why: It’s the archetypal German town.