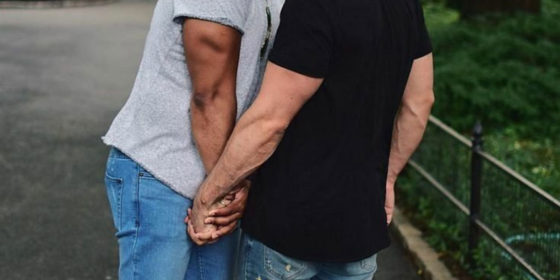 You might want to reach out and hold the hand of the person sitting next to you. Lean your head on their shoulder. Reach up and stroke their cheek. Caress their neck. Tussle their hair.

You reach over and kiss them, gently at first and then with passion. That sweet moment of giving yourself to another who wants you back.

But imagine if all of that was illegal.

If you are a man and you shared this intimacy with another man, you committed the crime of gross indecency until that offence was finally done away with in 2003. It was only then that the UK adopted gender neutral, victim centred sexual offences laws.

After 1967 defences were created. You didn’t commit the offence if there were only two of you, both of you were over 21 and you were in private.

Many found these conditions impossible to comply with, particularly the requirement for privacy. Where were you going to find that private space? Men lived at home with their mum or wife. Lodgings weren’t private. Intimacy could only be found in quasi-public places.

For most, the only way to have that tender moment with another was by cruising or cottaging. And therefore, crimes would be committed.

By creating the offence of gross indecency in 1885, gay identity was criminalized. The buggery laws were already on the statute book but buggery is hard to prove if those involved are consenting.

‘The state persecuted us and so did everyone else’

Then there was a whole raft of other sexual offences that targeted gay men: soliciting and importuning amongst others. What terrible and frightening crimes you committed if you were a gay or bisexual man.

To use the criminal law to target and control members of a group is persecutory. Gay men and by association lesbians, bisexuals and trans people were all persecuted.

The state persecuted us and so did everyone else. Violence, including bullying, against LGBTI people of all ages was taken for granted and was meted out with impunity.

Suicides were common place. Alcohol and drug addiction, normal. The arrests of gay men were just the tip of the iceberg. What institution of the state was not complicit in the demonization of LGBTI people?

When did the persecution end? 1967? Arrests had doubled by the 1980s and then the infamous Section 28, prohibiting the promotion of homosexuality became law, adding to the state-sanctioned misery.

1994 with the lowering of the age of consent to 18? The following year the Court of Appeal upheld the lawfulness of dismissing gay men and lesbians from the armed forces.

1998 with the Human Rights Act? Possibly because then – and only then – did LGBTI people have a meaningful legal mechanism to challenge the harm they were subjected to.

When a state persecutes, it has to provide redress. It was state policy for citizens to turn against citizens, mothers to reject their sons.

‘Set up an independent body to assess the damage’

The Pardon scheme is a start, but for many it borders on an insult. It is not redress. And countless men with convictions for consenting sex are not eligible for a pardon.

To address the harm done, the government has to set up an independent body to assess the damage the UK state caused to LGBTI people.

That body needs to look forward as well as backwards. It needs to propose mechanisms for redress.

It also needs to enable people to bear witness and not just all of us who were harmed by the state, but also those that did the harming should be given the opportunity to find reconciliation: the police who entrapped, the teacher who humiliated the lesbian child, those that shunned men dying with AIDS, the employer who fired someone for being gay or lesbian and the co-worker who stood by silent.

Who didn’t turn their vitriol against poofs and lezzers? We also turned on one another.

The state needs to apologize formally and meaningfully for what they did and encouraged us all do to one another.