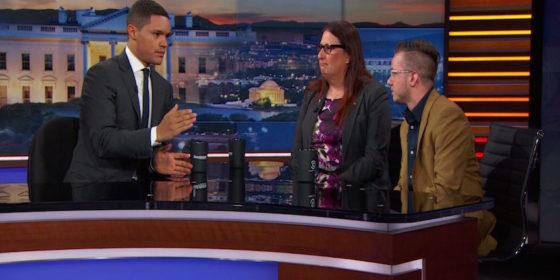 Since President Donald Trump announced via Twitter on 26 July that he plans to ban transgender soldiers from serving in the military in ‘any capacity,’ there has been a great deal of outrage.

On the 26 July episode of The Daily Show with Trevor Noah, two transgender vets were interviewed about their reactions to this news.

Joey Whimple and Jennifer Marie Long are two US military vets who served with distinction. Whimple was an HR supervisor for a combat support hospital. Long is a retired Sergeant Major and decorated combat veteran who was also the first soldier to receive the French National Defense Medal since World War II.

Whimple didn’t begin transitioning during his service out of fear of being ostracized.

‘When I was serving, it was considered a mental disorder to identify as transgender. And I saw people being chaptered out and dishonorably discharged from my unit left and right for various different reasons. So I held in my true self, and I was miserable. Absolutely miserable,’ he said.

‘In the last weeks of my career, word got out that I was transgender, and I was in fact living another life. Command called me up and asked me to retire. Quietly. My career ended with a phone call asking to retire. I was retired not with great fanfare—not with the pomp and circumstance that comes to a senior enlisted. I was a sergeant major. That’s the highest of enlisted ranks… I was doing it up until that moment they found out,’ she recalls.

Watch the full interview below to hear both Whimple and Long’s stories: