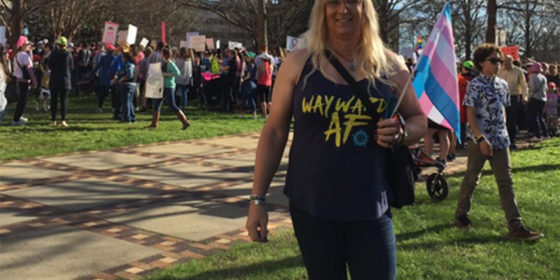 On Wednesday morning, it felt like all hell broke loose.  With a feeling of dread, I readied myself for the day before I tried to find the cause. Finally I could put it off no longer and signed in online. I felt like I got hit by a bus.

The person occupying our White House had been at work on Twitter again and the trans community was the victim of his idiocy.

He was not going to allow trans people to continue to serve in the armed forces. My initial reaction was rage and then hatred. I had to walk away and calm down before interacting with anyone.

I am an honorably discharged veteran of the United States Marine Corps. I am a transgender woman.

Granted, my time in the service took place in the mid-80s. I nevertheless felt this betrayal of our trans service men and women deep in my soul.

When I was in the Marine Corps, LGBTI people could not serve openly. Don’t Ask Don’t Tell was years away so we were still hiding our true selves away just to be able to serve our country.

My dysphoria had not reached the point where I couldn’t get by with the normal distractions of a young person in the service away from home for the first time.

I was able to concentrate on my job, on rugby, and on just being a marine. It was liberating to set the dysphoria aside and just be without a thought.

I did have the occasional bout to deal with. At the end of my tour, I got out and returned home to north Alabama with fond memories of my time in.

I tell people it was the best four years of my life and I mean it. The only thing that could have made it better would have been able to serve as my true self.

With the announcement last year that trans members would finally be able to serve openly, I cried. It was a day I thought I would never live to see and my joy for these service members could not be contained.

Then Wednesday happened. Like many LGBTI folk, I make no bones about the fact that I hate Trump. Unlike most of the young people, I’ve had a lot more time to develop my hatred. He was not a beauty pageant host. Nor was he a reality show host.

I have been watching this idiot befoul my television screen since the late 70s. I knew he is a self-centered narcissist and world class media whore who can’t spell truth much less tell one. How dare this creature attack honorably service members of our armed services? It was nothing short of treason.

He talked to his ‘generals’ and this was their recommendation. Lies, lies, and damned lies. Let’s look at his lies one by one.

The costs of medical care: A study conducted last year by the RAND Corp concluded that medical care for transgender veterans would be negligible. Around $5 to 8 million of the more than $80 billion dollar defense budget. That’s if every single trans person, all 15 000 of them, transitioned at once. To put that in perspective, the military spends around 80 million dollars per year on Viagra. Other than hormone therapy, which is already covered for all service people, transition is pretty much a one-time layout of costs. At the current time and regardless of the claims by conservatives, the military does not offer transition surgeries for anyone.

Trans people are burdens and affect readiness: Again, another lie which was dispelled by studies performed before the ban was lifted. In fact, both the American Medical Association and the American Psychiatric Association have come out in support of trans service. As well, current and past Joint Chiefs of Staff, Secretarys of Defense and the head of the Armed Services Committee, Senator John McCain and other Republicans in Congress. The ability to live their lives authentically can only remove the outside distractions posed by having gender dysphoria and distractions from fellow service members and command structure. I suspect the only generals Trump talked to were General Electric, or General Motors, or even The General when he was buying insurance.

My last thought is this: When the balloon goes up and the bugles sound, these young trans troops, as well as the older ones who re-enlisted or are about to retire, are their putting their lives on the lines for us. Whether you agree with them or not, they are doing the job and doing it with honor, courage, and patriotism. That’s more than a Trump has ever done for this country. Support them. Support us. Semper Fi.