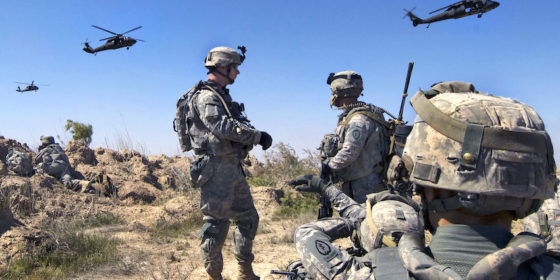 It was released via the Palm Centre, an independent research institute.

They join a mounting chorus of criticism including the US joint chiefs, the Head of the US Coast Guard and serving army members.

One defiant Staff Sgt. Logan Ireland said ‘I would like to see them try to kick me out of my military,’ in an interview with the Air Force Times.

This comes in the week as a Reuters poll reveals the majority of Americans support transgender people in the military.

Criticism has come from all corners of the world, last week UK generals took to Twitter to voice their opinion.

As an @RoyalNavy_LGBT champion and senior warfighter I am so glad we are not going this way https://t.co/S8ZI4NjpfQ

‘We have a justifiably rigorous selection process but it doesn’t include discrimination and we’re a better fighting force for it.’

The US Generals and Admirals wrote in their letter:

‘The Commander in Chief has tweeted a total ban of honorably serving transgender troops. This proposed ban, if implemented, would cause significant disruptions, deprive the military of mission-critical talent, and compromise the integrity of transgender troops who would be forced to live a lie, as well as non-transgender peers who would be forced to choose between reporting their comrades or disobeying policy. As a result, the proposed ban would degrade readiness even more than the failed ‘don’t ask, don’t tell’ policy. Patriotic transgender Americans who are serving—and who want to serve—must not be dismissed, deprived of medically necessary health care, or forced to compromise their integrity or hide their identity.

‘President Trump seeks to ban transgender service members because of the financial cost and disruption associated with transgender military service. We respectfully disagree, and consider these claims to be without merit. The RAND Corporation, as well as research in the New England Journal of Medicine, found that the financial cost of providing health care to transgender troops would be, at most, $8.4 million per year. This amounts to one one-hundredth of one percent of the military’s annual health care budget. As for ostensible disruptions, transgender troops have been serving honorably and openly for the past year, and have been widely praised by commanders. Eighteen foreign nations, including the UK and Israel, allow transgender troops to serve, and none has reported any detriment to readiness.

‘Recently, two former Chairmen of the Joint Chiefs of Staff have taken courageous stands in support of our transgender service members. General Martin Dempsey said of our transgender troops that, “The service of men and women who volunteer and who meet our standards of service is a blessing, not a burden.”‘

And Admiral Mike Mullen stated that:

‘I led our armed forces under the flawed ‘don’t ask, don’t tell’ policy and saw firsthand the harm to readiness and morale when we fail to treat all service members according to the same standards. Thousands of transgender Americans are currently serving in uniform and there is no reason to single out these brave men and women and deny them the medical care that they require. The military conducted a thorough research process on this issue and concluded that inclusive policy for transgender troops promotes readiness.’

The letter was signed by: