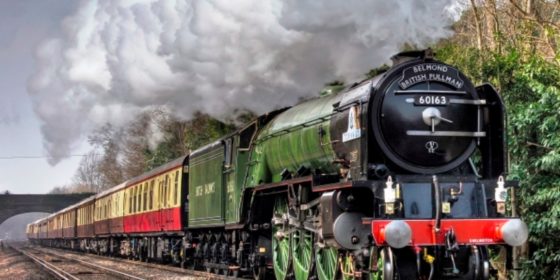 As we returned our gaze, history had come to life before our eyes. As steam billowed into the vast glass canopy above we found ourselves in the roaring 1920’s, dressed to the nines and eager to depart for our whistle-stop gastronomic tour of the Surrey hills.

As someone with an acute passion for railways, passed down to him by both his grandfathers, one who’s family laid the first tracks into London Liverpool Street station, this was an experience I’d been waiting my whole life to experience.

Being invited onto the footplate of a fully functional steam locomotive, in attire reminiscent of the period, a blue petal embellished tuxedo which I’m unapologetically in love with, was overwhelming.

As the distinct smell of engine steam wafted throughout the cab I decided to dedicate this day and its memory to both my grandfathers, Charlie and Edward.

The Belmond British Pullman is compiled of 11 individually named and vintage art-deco cars refurbished to their original glory, ready to share their history and hailing from some of the most famous services in British steam history, ‘The Brighton Belle’ and the ‘Queen of Scots’.

‘Phoenix’ was the first choice as a royal carriage and particular favorite of HM The Queen Mother while ‘Perseus’ famously formed part of Sir Winston Churchill’s funeral train in 1965.

Our journey today, ‘The Golden Age of Travel by Steam’, one of many available charter excursions, immerses passengers in the heyday of 1920’s luxury gastronomy over a four-hour journey winding through the Surrey Hills.

I’ve been obsessed with steam trains since I was a child; I joined the British Pullman on a 4-hour journey around the #Surrey hills for a 5-course silver service lunch on a vintage 1920s carriage. Bucket list checked. #discoverbelmond #britishpullman #tuxedo #bowtie #beards #gaycub #london #bucketlist #victoria #steamtrain #trains #history #gaytravel #gay #england

Boarding our car, whose panels had been commissioned, and now restored, by the skills of the same family business who worked on ocean liner Titanic, we could only imagine the excited popping of flashbulbs every maiden voyage of the time basked in.

In fact, as we were guided through the carriage by liveried stewards, it was the only thing missing to remind us of our belonging to the 21st century.

A grotesque understatement would be describing our accommodation as merely a ‘table’.

Beautifully elaborate, delicate and a truthful depiction of first class at the time our mouths were left wide open, only closing to sip champagne from crystal glasses in celebratory toast.

We were to be indulged with silver service fine dining across five courses of delectable British cuisine on our journey through the ever-changing and picturesque countryside.

Course selection changes depending on service but we were delighted, on a hot July day, to rejoice in some light but hearty dishes.

‘It isn’t often an experience can make you remember a version of yourself, and those you love, lost to time.’

Highlights of the service, for us, were the Smoked Haddock, spinach and ricotta tart, Lemon and thyme crusted Welsh lamb rump, cooked to the greatest perfection I must add, and the cheeseboard of selections from the British Isles complete with homemade chutney.

We couldn’t turn down the quintessential British dessert of Apple, rhubarb and ginger crumble, complete with whipped cream, but we were left quite engorged.

However, the coffee and petits fours perked our attention, as we passed through Redhill on our return heading to London.

The last hour of our journey on the Belmond British Pullman was spent basking in the final moments of a once in a lifetime experience.

On taking everything in, the sounds of silver spoons on bone china, watching the steam billowing over viaducts into the ravines below, the clacking of the engine’s wheels as they crossed over points, we were left us with a complete sense of peace.

It is important at times in life to be mindful and hold each small detail in our memories, so no single second is left forgotten – and this is one, or many, of them.

We steamed into London Victoria station as trainspotters and the public alike gathered to welcome our return and reach for even a flicker of the experience we just had.

I left our car as the young boy who used to beg his grandfather to take him to Colne Valley steam railway, or Bressingham steam museum, near to where he grew up, and where their passion for steam passed down through the generations to him. 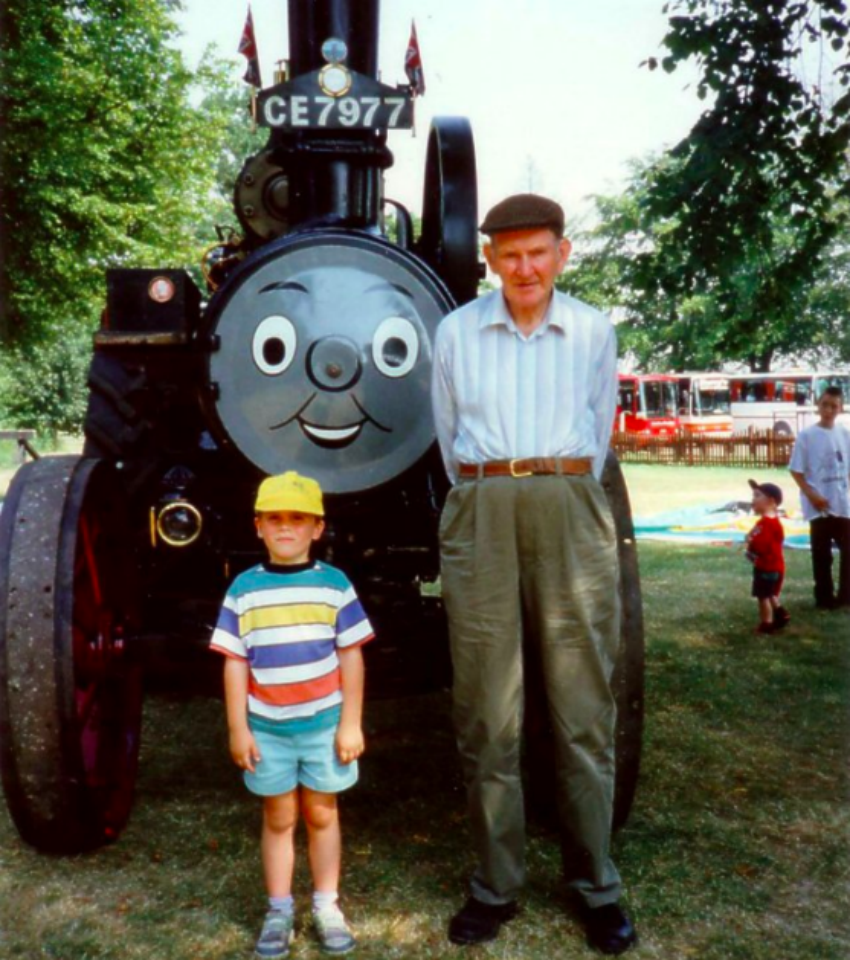 Me, age seven, with my Grandad Edward at Bressingham steam museum in Suffolk, England.

Memories of my time with my grandparents, and the passion for steam laid dormant as I grew older, reignited that day and I’m forever grateful – It isn’t often an experience can make you remember a version of yourself, and those you love, lost to time.

Watch this train spotting video of our journey on the Belmond British Pullman through the Surrey Hills on 1 July 2017:

Belmond British Pullman, sister train to the Venice Simplon-Orient-express, offers a host of journeys throughout the year from London Victoria Station, visiting some of Britain’s most famous cities, country houses, sporting and social events.