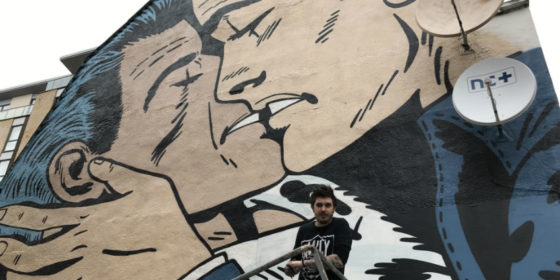 Rich Simmons, 31, is an artist from the south London city of Croydon. He believes art is meant to elicit a reaction in people, both positive and negative, and hopes his new mural will do just that.

‘I wanted to normalize two guys kissing because to me, it’s a normal thing,’ the artist said.

But things got off to a rocky start.

On the first day of stencilling the artwork, a random man threatened his personal safety. ‘He said he was going to bash my head in,’ Simmons told Gay Star News.

The guy wasn’t happy there was a public depiction of a same-sex kiss. And he’s not alone.

LGBTI people in Croydon told the council they do not feel comfortable holding hands with their partner in public.

So the council held a ‘public display of affection’ event earlier this year, encouraging same-sex couples in the area to express their love on a stage in the city’s centre.

The council then decided to commission the artwork by Simmons.

There are also no gay bars in the local area, so visibility of LGBTI couples is quite poor, says Watson.

‘People still feel uncomfortable being out in Croydon so this artwork pushes the boundaries a little bit.

‘If any LGBTI people come down the street and they see this and it makes them feel a little better about themselves, that’s an important part of what we’re trying to do.

‘This sends out a very strong message that Croydon is a gay-friendly place,’ Watson said.

Simmons agreed: ‘The council are putting a lot of work into that to show that they support equality and show diversity.

‘This is my way of contributing to that and opening up into more areas rather than just one weekend a year of Croydon Pride.

‘This piece will be up for a long hopefully and it will get a lot of people supporting it – showing that we embrace equality and diversity in Croydon,’ the artist said.