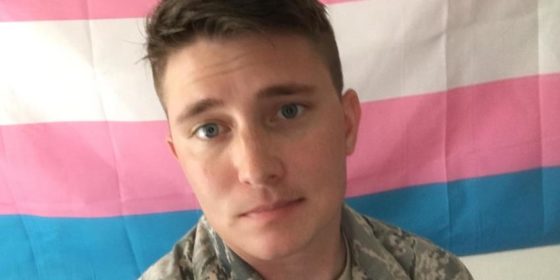 This week Donald Trump tweeted plans to ban transgender people from serving in ‘any capacity’ in the US military.

Though the chairman of the joint chiefs said there will be ‘no modifications’ to the US military’s transgender policy, the tweets have caused much debate.

Transgender people, both serving members of the armed forces and veterans, have been responding all week.

Sterling James Crutcher posted a message to Trump from the Barksdale Air Force Base, Louisiana.

‘I put on this uniform every day, not for praise or adoration. Not for some free healthcare.

‘I do it because it was ingrained in me as a child by my grandfather. He spoke so highly and proudly of his years of service in the army. I joined because there is a sense of pride you get from serving your country and fighting for your neighbors.

‘I have fought and work hard to prove my worth, not only in the military but in everyday life. If there is anything I have learned from my grandfather, it is to always be above reproach and live proudly.

‘I will continue to do so, no matter what the ignorant and uneducated do. My life shall be an example of truth.’

Since being posted the post has attracted over 90 thousand reactions.

Of these thousands, only a tiny 28 people reacted with the negative angry emotion.

Celebrities, politicians and other public figures have spoken out against the decision.

GLAAD called the comments ‘a direct attack on transgender Americans.’

GLAAD’s Twitter status has also been inspiring thousands to post a picture with the words ‘Trans people are not a disruption’ repeated.

Around 12,000 transgender individuals currently serve in the US military.

In addition, approximately 134,400 trans adults are military veterans or retirees.