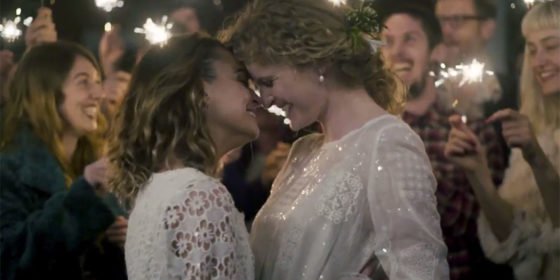 Heather*, 67, has been with her partner for 26 years but only declared their relationship on Australia’s Census for the first time last year.

The number of same-sex couples increased 39% from the previous Census in 2011 that counted 33,700 couples.

Heather like many Australians felt safer being ‘out’ and declaring her relationships, but their motivation was also political.

‘We will be together until one of us passes to the next realm,’ Heather told Gay Star News.

‘Personally I thought that perhaps putting it onto the Census it would hurry up the marriage thing for us.

‘For us marriage would just mean that we would have control on what happens to the other partner in case of accident and illness and protects us. It also would mean that we will be next of kin.’

Executive Director of the Equality Campaign – a group dedicated to achieving marriage equality – Tiernan Brady said the figures were a reminder the debate was about real people.

Australia has been embroiled in a debate about legalizing same-sex marriage since 2004, with latest political rumblings suggesting the issue may soon be resolved.

‘These numbers are a powerful reminder that the issue of marriage equality is about real people who simply want the same status and dignity as every other Australian,’ Brady said.

‘It often proves too easy for this issue to be hijacked by politics, we need to remember that LGBTI people are our family members, friends and work colleagues.’

The median age of people in same-sex couples was 40 years, which lower than heterosexual people in a couple at 48 years.

The Australian Bureau of Statistics holds a national Census every five years.

The 2016 Census yielded a number of surprising results.

For the first time more people said they had ‘no religion’ than any other religion at 30% of the population.

A mix of Christian denominations topped the religious category. But the number of people reporting a Christian religion has decreased from almost 74% in 1991 to 52% in 2016.

Australia is also becoming even more culturally diverse. The number of people who were born overseas jumped by almost one million people in five years.

*Heather is not her real name.