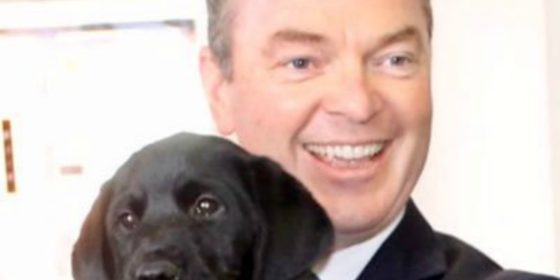 A senior government minister was caught on a secret recording saying he thinks Australia will get marriage equality ‘sooner rather than later’.

The tape was leaked to News Corp columnist Andrew Bolt who revealed the conversation. The leak soon was a top new story in Australia with Pyne’s name trending on Twitter.

‘Friends, we are in the winner’s circle — but we have to deliver a couple of things and one of those things we’ve got to deliver before too long is marriage equality in this country,’ Pyne is heard saying on the recording.

Pyne has been an MP since 1993 and is the current Minister of Defence.

His office quickly released a statement saying Pyne’s comments did not mean marriage equality was ‘imminent’ in Australia.

I support marriage equality and if Labor had supported the plebiscite, it would now be a reality. The govt has no plans to alter the policy.

‘The Minister said that whilst marriage equality had failed to materialise over the last two years, it would become a reality eventually,’ the statement said.

A recent national Galaxy poll showed the Government will potentially lose office if it does not allow a free vote on marriage equality.’

The leaked audio comes a week after the 10 year anniversary of a majority of Australians supporting marriage equality.

The government is still standing by its policy of resolving the issue through a public vote called a plebiscite.