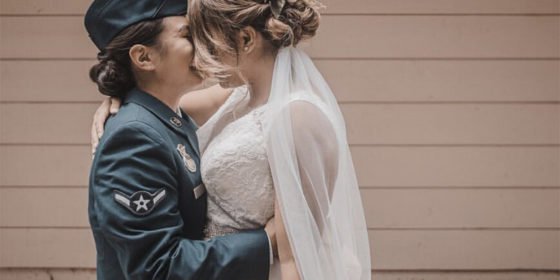 All couples will face challenges in their relationship at some stage. This is particularly so when one half is in the military. Even if they are not sent to a foreign war zone, it can entail time spent apart or relocations to other parts of the country.

Photos of the wedding of California couple Cristine and her Air Force wife, Rani, [they’ve requested we don’t use their surnames] recently prompted many complimentary comments on social media.

Rani, who works in the Security Forces (‘basically I’m a military cop’) wore her uniform, while Cristine wore a traditional bridal gown.

The June 2017 ceremony itself took place at San Francisco City Hall, followed by ‘a beautiful backyard wedding at my parents home in Union City, CA, the next day,’ says Cristine.

‘We were surrounded by our closest family and friends. We had a S’mores bar and danced till the police shut us down! I have never experienced so much love in one day!’

Cristine, 28, was born in Hawaii to parents originally from the Philippines. Her father was in the army and the family ended up settling on the outskirts of San Francisco. She was raised by her mom after her parents split while she was still young.

Rani, 23, was born in Charleston, South Carolina, but raised in San Lorenzo, California.

The two met through mutual acquaintances, but it was when Rani became the best friend of Cristine’s sister that they started to run into each other more often. At the time, Cristine had a girlfriend and Rani was dating a man.

‘Can you believe that?’ says Cristine, looking back. ‘Funny thing is, all her friends and I always had an inkling that she was interested in the same sex. Although at this time of her life, even when she was asked if she liked girls, she’d deny it!

‘Over time, we became good friends and our circle of friends became closer. She broke up with her boyfriend and started dating her first girlfriend. I was still with mine as well. One day, we ran into each other at a music festival and with a little liquid courage, I couldn’t help myself and I told her that I’ve always had a crush on her. And that’s where it began!’

Some members of their families were initially skeptical, because there’s a five-year-age gap and because Rani was the best friend of Cristine’s sister. After ‘a couple of rough patches,’ eventually everyone came around.

The next challenge was Rani’s choice of career in the Air Force.

‘I must say it has its ups and downs,’ says Cristine of having a wife in the military.

‘The hardest part was not being able to see or talk to her during her Basic Military Training.’

This commenced last November and lasted for six months. The women missed spending Thanksgiving, Christmas, their birthdays and dating anniversary together.

‘During that time our only form of communication was writing letters. And occasionally they would be granted a phone call. And it’s true what they say, distance makes the heart grow fonder.

‘Every time I would get to see her after a long time of separation, the feeling is just indescribable. It’s like finally being able to fill that empty space and feeling complete again.

‘Being with someone in the military takes a lot of getting used to. Every time we have to part ways it still hurts. As the saying goes, it does not get any easier, you just get better.

‘When duty calls, it calls’

‘The biggest challenge I faced so far, is the uncertainty of things.

‘When duty calls, it calls. And there’s nothing you can do about it, but to support your significant other wholeheartedly.’

‘Marrying someone back home, and being in a long-distance relationship, it’ll have its difficult times,’ says Rani. ‘It’s definitely not easy, but we’ve proved to ourselves that this is something that we can do.

‘During the duration of the time when I was in Texas for Basic Military Training (BMT) and Tech School for my job, communication was hard to come by because they were obviously shaping me into an Airman, making sure I was focused on the task ahead.

‘Tech school was a little better. I was able to talk to her during my off time and Facetime her whenever I was free. But it didn’t change the fact that I couldn’t see her in person, not knowing when I would truly be done with school, and just holding back until I finally came home.

‘So just having to go through the unknown and just taking it day by day was definitely a eye-opening experience.’

‘A couple of months before Rani left for Basic military training we decided that we would get married before she left,’ says Cristine.

‘When we brought this up to our family they suggested that we wait. They wanted us to wait for her to finish and graduate. So we did just that. Six months later, when Rani came home from tech school, she proposed. It was quite a lovely surprise.’

In fact, Rani even filmed the proposal – with the help of friends and flying drone camera!

As for being out to Air Force colleagues, Rani says she find it very easy in today’s US military: ‘I am comfortable being out to my colleagues, no matter if it’s at work or outside of work.’

As for the future, Cristine foresees a period of adjustment.

‘I do hope that I get the hang of this! Military life is a completely new life to us. There’s so much adjusting that we’re going to have to do. It’s an entirely different lifestyle.

Currently a makeup artist and a manager at a salon in downtown Burlingame, she is hoping to get a cosmetology license: ‘So that way wherever we go I be able to bring my talent. I do hope that within the next five years, we will be able to do plenty of traveling, see the world and hopefully plan for babies!’

Rani says her hopes are just to continue to have a ‘happy and healthy’ life together.

‘We’re both new to this military life and I feel like there’s is still a lot to learn and to adapt to. I always tell myself this, and I remind Cristine, to just have an open mind and be prepared for whatever will lie ahead.

‘I know that sounds very broad and dry but I think we’ve learned that this is how life is going to be for the next couple of years. What’s a few years of this lifestyle compared to what we still have in store for the rest of our lives?

‘I’ve only signed up for the bare minimum but who knows how long I’ll actually want to stay in for after those four years: I just want to make the most of what they provide for me and my wife and hope that it’ll guide us into the right direction of where we want to be in our future.

‘As long as she’s happy, I’m happy and vice versa. This is just another building block towards our happily ever after.’ 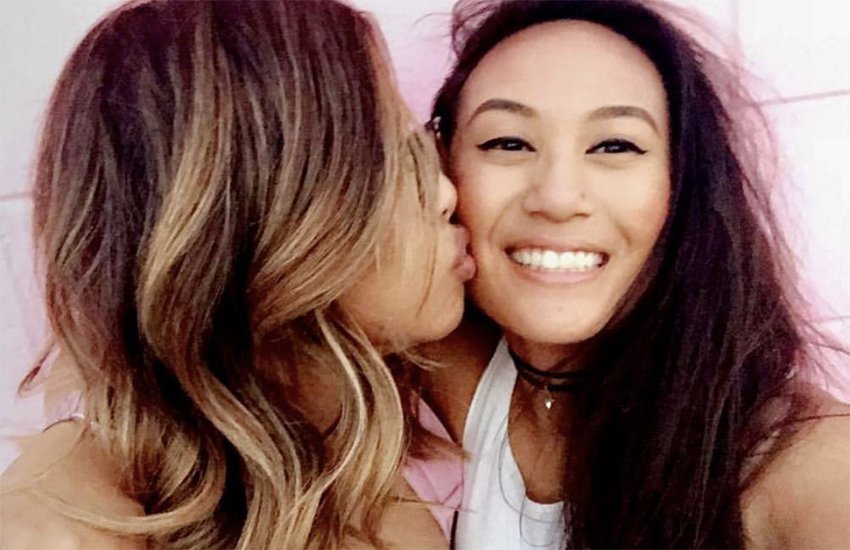