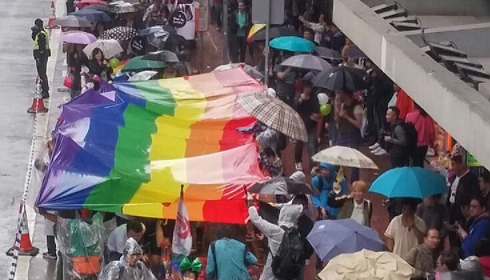 A British gay woman has taken action after she was refused a spousal visa because she’s in a civil partnership.

The British woman, known only as QT, was moving to Hong Kong in 2011 with their civil partner, known as SS.

SS was moving there for a new job.

Straight couples are eligible for ‘dependent’ visas which allow them to enter Hong Kong, and work.

The Daily Mail reports QT was later given a 12-month visa that would allow her to work, however it was still ‘less favorable’ treatment.

Human Rights barrister, Dinah Rose, argued even if same-sex marriage isn’t recognized by Hong Kong Law, that does not mean same sex couples in a civil partnership or even married outside of Hong Kong should be denied the rights of heterosexual married couples.

Rose also brings to light people in polygamous marriages are allowed to bring in one of their partners on a ‘dependent’ visa, even though they too are not legally recognized relationships in the country.

Twelve international banks and businesses have expressed they will be filing submissions to the Court of Appeal. They believe the previous rejection of the case could affect Hong Kong’s competitiveness and ability to hire global talent.

Ben Olmsted, in an article titled ‘Are Hongkongers really free if we can’t marry the partner of our choice?‘, states he believes if given the opportunity, ‘most of the people’ would embrace marriage equality.